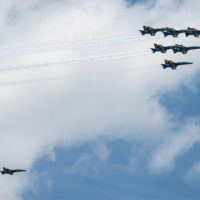 Jul. 29, 2020—The U.S. Navy’s Blue Angels flight demonstration squadron soar directly above Vanderbilt Stadium on May 14 during a series of nationwide flyovers, which included Nashville. 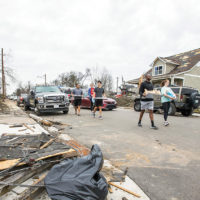 May. 14, 2020—In the early morning hours of March 3, a series of massive tornadoes cut a path of destruction through several Nashville neighborhoods and other parts of Middle Tennessee, claiming at least 25 lives and damaging hundreds of homes, businesses, schools and churches. During the days that followed, members of the Vanderbilt community responded by rolling up their sleeves and pitching in however they could.

Feb. 17, 2020—During the Commodores’ annual Salute to Service honoring active-duty service members, veterans and first responders, representatives of the military community unfurl a massive U.S. flag in Vanderbilt Stadium before the football game against Kentucky on Nov. 16.

Nov. 7, 2019—First-year students move into Stambaugh House, one of 10 residence halls on The Martha Rivers Ingram Commons, in August.

Ice Age: Vanderbilt expedition to Antarctica studies ice and how it has changed over millions of years

Feb. 19, 2019—In the remote mountains far beyond Antarctica’s McMurdo Station, Vanderbilt geologist Dan Morgan and undergraduate Andrew Grant lived in tents for more than a month while they hunted in the glow of an ever-present sun for the oldest ice ever found.

‘We Remember’: Preserving the memory of Holocaust survivors

Nov. 19, 2018—John Pregulman, BA’80, has spent the past five years taking photographs of Holocaust survivors. To date, he has photographed 679 survivors in 33 cities in the U.S., as well as in Krakow, Prague and Tokyo.

Jun. 8, 2018—The South Asian Cultural Exchange welcomed students to Wyatt Lawn on April 15 as part of a weekend-long celebration of the Hindu festival known as Holi.

Feb. 26, 2018—With a low unemployment rate, strong job growth, and a relatively low cost of living—plus two top professional sports teams (with a third on the way in Major League Soccer) and world-class music and dining—what’s not to love about Nashville?

Nov. 21, 2017—Vanderbilt’s newest first-year students will likely remember Aug. 21, 2017, for a long time to come. Not only did the date mark their official welcome to the university, but the approximately 1,600 students also donned safety glasses on The Commons Lawn to witness the total solar eclipse that appeared in Nashville that day—the first time in 538 years that such a sight had been visible in Middle Tennessee.

Sep. 7, 2017—Like the rest of Nashville, Vanderbilt was bitten by the hockey bug as the city’s 20-year-old NHL expansion team, the Predators, battled the Pittsburgh Penguins in June for this year’s Stanley Cup. University photographer John Russell, who shot much of the action for the Nashville team (including the photo seen here), even helped enlist Vanderbilt’s mascot, Mr. C., to rally Preds fans in the final days of the championship series.