A Vanderbilt astrophysicist played a key role in discovering an entirely new breed of black holes that presents far-reaching and fundamental questions about how we understand the universe.

With close to a thousand scientists around the world working together through the Laser Interferometry Gravitational Wave Observatory Scientific Collaboration (LSC) and the Virgo Collaboration, Vanderbilt research assistant professor Karan Jani was a key contributor to the publications explaining the discovery of this massive black hole and discussing its implications in the journals Physical Review Letters and Astrophysical Journal Letters. Both articles were published on Sept. 2.

“This is a milestone in modern astronomy and a personal milestone after six years of intensive research of hunting these elusive black holes,” said Jani, named Vanderbilt’s postdoctoral scholar of the year. “The system we’ve discovered is so bizarre that it breaks a number of previous assumptions about how black holes form. We took more than a year to confirm this alien black hole’s existence and are thrilled to be sharing this discovery with the world.”

Traditional astronomy predicts that there is a limit to the mass of a black hole that forms when a star dies, but this gargantuan black hole far exceeds that theoretical limit. Weighing in at 142 times the mass of our Sun, it was formed about six billion years ago from the collision of two black holes with masses roughly 85 and 65 times that of the Sun. The collision released eight solar masses of energy which burst into the universe as a gravitational wave. This is the most massive collision of black holes ever detected by gravitational waves and marks the first identification of what’s known as an intermediate-mass black hole.

The researchers said this black hole may have developed after two smaller black holes collided, then found a third black hole a few million years later, which caused it to grow even larger. The probability of this happening is even lower than if two golf balls—one hit into the air from China and the other from Argentina—collided with each other. This analysis is one of many hypotheses, and researchers are still considering and testing a host of theories on how it came to be.

“We have looked into every known scenario that would have created this black hole but don’t have a conclusive explanation for it just yet,” Jani said. “What we do know for certain is that whatever makes this intermediate-mass black hole is a much rarer process. We will need to find many more to understand their origins.”

According to a press release the gravitational-wave signal, labeled GW190521, was detected on May 21, 2019 by LIGO, two 4-kilometer-long interferometers in the United States, and Virgo, a 3-kilometer-long detector in Italy. The signal, resembling four short wiggles, is extremely brief in duration, lasting less than one-tenth of a second. From what the researchers can tell, GW190521 was generated by a source that is roughly 5 gigaparsecs away, when the universe was about half its current age, making it one of the most distant gravitational-wave sources detected so far.

“LIGO once again surprises us not just with the detection of black holes in sizes that are difficult to explain, but doing it using techniques that were not designed specifically for stellar mergers,” said Pedro Marronetti, program director for gravitational physics at the National Science Foundation. “This is of tremendous importance since it showcases the instrument’s ability to detect signals from completely unforeseen astrophysical events. LIGO shows that it can also observe the unexpected.”

Kelly Holley-Bockelmann, Stevenson Professor of Physics and the inaugural chair of the NASA LISA Study Team said by opening a gravitational window onto the universe it was clear that LIGO would offer many more surprises.

“This intermediate-mass black hole discovery is one of my favorites, because it’s possible to spot them long before they collide with future gravitational-wave telescopes like LISA,” Holley-Bockelmann said. “By combining both LIGO and LISA observations, we’ll be able to watch the final inspiral and collision with better precision—and that could be the key in unlocking the mystery of their formation.”

Jani said it was humbling to be among the first people to see this signal from the universe.

“I feel quite privileged. There are no limits to what we’ll find when we observe the universe,” he said.

“This discovery gives us great perspective on where we are in our knowledge of the universe and opens some amazing possibilities.”

This research was funded by the National Science Foundation.

The images in the video are credited and captioned, in order, as follows: 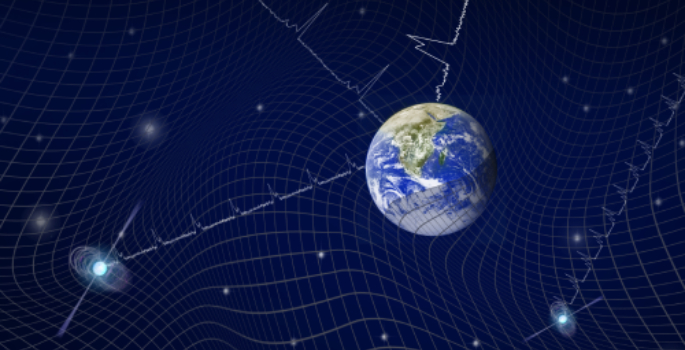