The Vanderbilt Postdoctoral Association and Office of Postdoctoral Affairs has announced its 2020 award winners. The association’s annual symposium, at which postdoctoral scholars from across campus present their research, network and are recognized for their excellence within the postdoctoral community, was canceled this year due to COVID-19. The award recipients who would have been recognized at the symposium are as follows:

Mentor of the Year Award

Recipients of the Mentor of the Year Award must demonstrate a willingness to share expertise and advice; service to the community at large, including other mentoring activities; and scholarship within the mentor’s own career, including publications, awards, presentations and honors. The Vanderbilt Postdoctoral Association solicits nominations from all Vanderbilt postdocs, and the VPA Symposium Planning Committee reviews and votes.

This year’s recipient is Jennifer Ufnar, research assistant professor of teaching and learning and interim executive director of the Center for Science Outreach.

Ufnar’s mentees describe her as “the best mentor I have ever had, always emphasizing my career goals and working to give me access to additional training and expertise.” In her role as executive director of the Center for Science Outreach, she mentors 11 postdocs in addition to master’s and Ph.D. students. With so many mentees, it is notable that the most common description in her nominations was her personalized approach to each mentee, adapting to their needs and aspirations. Some examples of the comments are as follows:

The Postdoc Service Award goes to a postdoctoral scholar who has demonstrated sustained service to Vanderbilt through service to the community at large—through professional societies, scholarly work outside regular lab responsibilities, or by leading within and promoting the postdoc experience at Vanderbilt. The Vanderbilt Postdoc Association solicits nominations from all postdocs, and the VPA Symposium Planning Committee reviews and votes.

This year’s recipient is Carlyn Mueller.

Mueller is described as an “inspirational role model who has made a positive impact on the Vanderbilt community.” She is an active researcher in the lab of Anjali Forber-Pratt, assistant professor of human and organizational development, and an Academic Pathways Postdoctoral Fellow. She has mentored many students in her lab and department in developing their academic writing, professional etiquette, and their voice in a social justice-focused field. Beyond her numerous academic achievements, such as an outstanding thesis award from the AERA Special and Inclusive Education Research special interest group, she serves on the Interim Chancellor’s Diversity Committee and is a fierce advocate in the community for disability rights. Her nominator noted, “Dr. Carlyn Mueller is the epitome of a Vanderbilt postdoc; her leadership skills as a scholar and a mentor, as well as her fun-spirited nature and passion for helping others to succeed, are a testament to the impact she has had on me and countless others.”

Postdocs Award recipients must demonstrate excellence in research, scholarship or creative expression as evidenced by publications, presentations, awards, service and mentoring. Each of this year’s awardees embodies Vanderbilt’s research mission. The Office of Postdoctoral Affairs solicited nominations from faculty in each school, and a faculty committee reviewed and voted on all nominations.

The Postdoc Honorable Mention Award was given to Sam Centanni, mentored by Danny Winder, Bixler-Johnson-Mayes Professor of Molecular Physiology and Biophysics, Pharmacology and Psychiatry, and Katie Leaptrot, mentored by John McLean, Stevenson Professor of Chemistry.

For the past four years, Centanni has been a postdoctoral scholar in the Vanderbilt Center for Addiction Research. His research focuses on studying the interactions between excitatory drive in the extended amygdala and alcohol abstinence-induced negative affective behavior. Winder calls Centanni one the strongest postdocs that he has trained and expects him to emerge as a leader in the field when he establishes his own independent laboratory.

Anxiety and depression associated with alcohol withdrawal are significant clinical concerns and also thought to be major driving forces of relapse to alcohol abuse. Centanni has meticulously investigated abstinence-induced alterations in synaptic circuitry in the extended amygdala using a variety of approaches, including ex vivo brain slice electrophysiology, chemogenetic and optogenetic circuit manipulation strategies, mouse genetics and mouse behavior, and fluorescent in situ hybridization-based RNA analyses. From these studies, he has found that endocannabinoid-sensitive excitatory drive into the bed nucleus of the stria terminalis (BNST) is upregulated during forced abstinence from alcohol intake. Moreover, he found that endocannabinoid signaling inhibits an insular afferent into this region, and mimicking of the endocannabinoid action with expression and activation of a chemogenetic surrogate of the endocannabinoid receptor on insular neurons can reduce activation of the BNST by stress as well as alcohol abstinence-induced affective disturbances.

From his postdoctoral work, a large chunk of his primary project was recently published in Neuropsychopharmacology (Centanni et al., 2019), a paper that Dr. George Koob, director of NIAAA, highlighted in his last quarterly update on NIAAA progress to its advisory council. He has also been an very collaborative researcher and is listed as a co-author on seven primary research articles during his postdoctoral training.

In addition to his exceptional research accomplishments, Centanni is the recipient of a NARSAD Young Investigator Award, a highly prestigious grant targeted to senior postdocs and assistant professors, and a K99 award from the NIH, which will fund his transition into an independent research lab. Winder also notes Centanni’s strong leadership skills in the lab, which have led to him being listed as the senior corresponding author on two manuscripts in preparation. He is also a leader in the department, where he is the inaugural director of the trainee-run Vanderbilt Center of Addiction Research Journal Club.

Leaptrot has served as a postdoc in the McLean lab in the Department of Chemistry since 2018. Her mentor describes her as “easily the best out of the past 21 postdoctoral scholars with whom I have worked.” Leaptrot’s postdoctoral research focuses on three large-scale projects: one involving characterization of new IM instrumentation in collaboration with MOBILion Systems, Inc.; a second is an investigation of fatty acids and bile acids via IM-MS as an extension to her lipid work; and a third is a study of polycyclic aromatic hydrocarbons in non-aqueous phase liquid waste, in collaboration with David Kosson, Cornelius Vanderbilt Professor of Engineering. She has worked tirelessly to develop methods, acquire data, and analyze her results.

Leaptrot has published eight peer-reviewed works, including seven journal articles and one book chapter. Her most recent publications in Nature Communications and Chemical Science, discussing IM-MS quantitative trends in lipids and establishing a crowd-sourced compendium including her lipid measurements, has been highly influential in the field. In fact, her manuscript has already been cited 27 times and has been featured in a Nature Communications collection on biological mass spectrometry. Her presentation of this work was honored by the Vanderbilt Postdoc community as the Best Poster in Chemistry and Biochemistry at the 2019 Vanderbilt Postdoctoral Association Symposium.

Postdoc of the Year

The Postdoc of the Year award recognizes a postdoctoral scholar who demonstrates excellence in research and scholarship since January 2017. The nominee must demonstrate excellence in several criteria, including publications, presentations, awards/honors, service and mentoring. The Office of Postdoctoral Affairs solicited nominations from faculty in each school, and a faculty committee reviewed and voted on all nominations.

This year’s recipient is  Karan Jani, mentored by Kelley Holley-Bockelmann, Stevenson Professor of Physics and Astronomy.

Jani joined Vanderbilt less than a year ago but has already made a significant impact. He works in the Nobel Prize-winning LIGO (Laser Interferometer Gravitational Observatory) Collaboration, leading the search for a type of black hole that is suspected to exist but has never been seen: an intermediate mass black hole. This rather plainly named black hole is important because it’s so massive it could not have formed through normal stellar evolution; therefore, finding one is evidence of new physical processes at work.

Aside from his LIGO work, Jani is a leader in the nascent field of gravitational wave and multi- messenger astronomy. He has published a Nature Astronomy paper on what can be learned through multi-band gravitational wave observations; an Astrophysical Journal letter on how LIGO observations can be combined with the observed star formation rate to constrain the dynamical mechanism for black hole mergers; co-written two NSF grants on numerical relativity waveforms for multi-messenger astronomy; and he has at least four more papers in the works outside of the prolific LIGO Collaboration. He also has been contacted by Google to discuss bottlenecks in numerical relativity simulation code with the intent to deploy a team to help design the next-generation code.

His first-author Nature paper garnered significant media attention, as did his ApJ letter. Jani has a high profile in the media already, having earned a Forbes 30 under 30 award and a substantial social media following (@astrokpj), which he uses to promote black hole science. He takes great care in presenting science to the public; the lovely waveform figure from the first gravitational wave discovery was his design, and his talks are exceptional.

He also mentors students in the Fisk-Vanderbilt Masters-to-PhD Bridge Program, where one of his students will bridge over to Vanderbilt this year with a first-author paper on observing the LIGO black holes with LISA, a future space-based gravitational wave observatory set to launch in the next decade. LISA will be able to detect these black hole mergers months before they merge in the LIGO band, which will allow physicists and astronomers to better isolate the merger in the sky and measure properties, like spin, that are ill-constrained with ground-based gravitational wave detectors. Jani is highly collaborative, curious, industrious and imaginative –exactly the type of “big idea” scientist to connect traditional astronomy and gravitational wave physics to build a new field.

The VPA and the OPA would like to thank all of those who have worked tirelessly in supporting the postdoctoral community this  year. 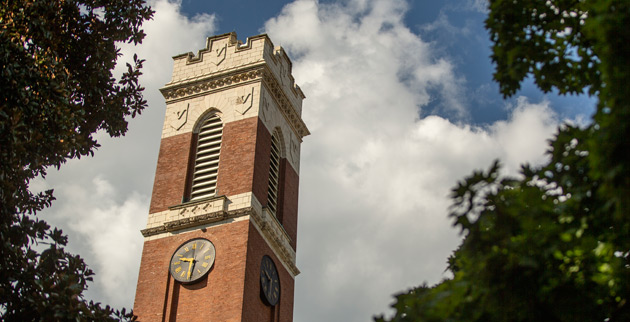