A short news article about horrific atrocities happening in the remote Nuba Mountains region of Sudan first led Ryan Boyette to take a dangerous leap of faith and move to the Nuba Mountains in April 2003. Thinking that too few people around the world seemed to notice the heinous crimes happening to innocent people in this region, Boyette eventually armed himself with a special weapon—video cameras—that helped change the trajectory of the war.

This outreach also put him and his family on a transformative path that connected him with other change-makers, including actor George Clooney, who helped steer Boyette and his wife to Vanderbilt University. Today, they have a goal of improving the lives of Sudan’s Nuba people, but this time through the power of education. 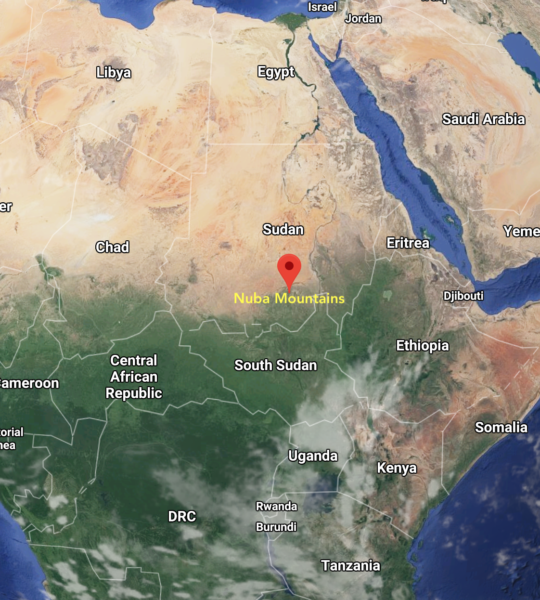 “I was motivated by my faith to go to Sudan after learning that the Sudanese government was systematically burning down churches and destroying villages,” says the Florida native, who started working for Samaritan’s Purse in the Nuba Mountains in 2003 right after he graduated from college. “These community-oriented people are fighting to survive through famine and war, yet they are so resilient and dedicated to a better future for themselves.”

Boyette started his journey by working with local Sudanese churches. He learned the local languages of Otoro and Sudanese Arabic. After living in the area for several years and becoming a part of the community, in 2007 he built a special friendship with a Nuba woman passionate about learning.

“When I first saw him and saw what he was doing for my people, I was in love with his actions,” says Jazira Awad Babikir Albiki, who married Ryan Boyette in 2011 and became the first native Nuba woman in her area to marry a white man.

“Jazira’s father sent letters to area churches since the marriage was so unusual,” Ryan says. Six-thousand people came from around Sudan to witness the nuptials.

But just months after their wedding, the Sudanese government, under President Omar al-Bashir, resumed aggressive daily bombing campaigns, killing and maiming people, destroying farms and water sources, and driving the Nuba people to hide and starve in caves.

“We saw the people around us who were being killed, who were dying of starvation, whose homes were being burned—friends of ours who had just been at our wedding,” Ryan says.

For Jazira, the deadly attacks only reawakened the trauma she’d been experiencing her entire life.

“I knew that as soon as the conflict started that no one was going to hear about this violence. And this is a gap we could fill,” Ryan says.

Yet from the desperation rose an idea to help bring light to this genocide. Boyette would return to the same spark that first drew him to Sudan: a news story. Since he was living in an area forbidden to outside media, he and a team of brave Nuba people would video record the atrocities themselves.

“I knew that as soon as the conflict started that no one was going to hear about this violence. And this is a gap we could fill,” Ryan says.

Jazira’s experience with war helped prepare Ryan by teaching him the sounds and flight patterns of the planes and where they might attack.

“The first bombing raid we experienced, he started freaking out. So then I felt like, OK, I must do some kind of lessons here for him so that he can really do this,” Jazira recalls.

While Sudan’s government continued to deny any attacks, Ryan used a solar-powered laptop and satellite phone to send graphic videos and on-the-scene interviews to the U.S. government, the United Nations and reporters through his makeshift news agency, Nuba Reports.

Reporters reached out to Ryan after seeing the hidden acts of brutality he and his team were recording, some asking for his help sneaking into the dangerous region themselves.

Human-rights advocate and actor George Clooney was among those who asked Ryan to guide him through Sudan so he could raise awareness about the violence. Clooney’s friendship would later become pivotal to the Boyette’s transition to Vanderbilt.

But this newfound attention from the outside world made Ryan and Jazira targets, putting them in a gravely dangerous position. In May 2012, when Jazira was seven months pregnant, jet fighters specifically targeted their house. Ryan and his crew were able to jump in a hole for protection. But Jazira was at a neighbor’s house.

“I saw the bombs falling near our home and then the planes came toward me,” Jazira says. “I jumped behind a rock and my dog Sampson lay over me crying.”

The shrapnel from the bombs hit the rock just behind Jazira. She, her unborn child and her dog survived.

“God saved me for some reason, for something that I’m still trying to find out why I’m still alive up to now,” Jazira says.

The Boyettes and Nuba Reports doubled their efforts to get videos out and expose the Sudanese government’s attacks. Pressure within and outside of Sudan ultimately led to protests and the ouster of Bashir in 2019, creating a temporary peace.

This period of peace also opened a door for the Boyettes to start a new mission, something close to Jazira’s heart: expanding education for the children of the Nuba Mountains.

The Boyettes passionately believe education is the key to helping raise people out of poverty and desperation.

“Every village that we visited, when we asked families about their greatest needs, even villages that are hungry and don’t have water, they will always say education because they see it as their long-term solution,” Ryan says.

He also believes education can help alleviate the systemic issues plaguing their country.

“There’s no way we will understand the political side of our complicated issues in Sudan until our kids are educated,” Jazira adds.

“There’s no way we will understand the political side of our complicated issues in Sudan until our kids are educated,” Jazira adds.

Soon after the ceasefire, the couple and their two young children came to Florida to visit Ryan’s parents and brainstorm a new learning initiative called To Move Mountains.

Ryan also made a promise to his wife that he would support her dream to earn a college degree. That’s when fellow missionaries recommended Vanderbilt Peabody College of education and human development.

“We met with several professors at Vanderbilt and told them about our dreams and the vision for our To Move Mountains education nonprofit in Sudan, and they were so enthusiastic and supportive,” Ryan says. “It just felt like a perfect connection.”

They both applied to Peabody—she for her undergraduate degree and he to the graduate program in international education policy and management. George Clooney, of all people, wrote their letter of recommendation.

“He was really happy to hear that we wanted to go to Vanderbilt, because his wife Amal spoke at Vanderbilt,” says Ryan, referring to human rights attorney Amal Clooney delivering the 2018 Senior Day speech and being awarded the Nichols-Chancellor’s Medal.

“We are so lucky to have dynamic students like Ryan and Jazira. They bring a passion and commitment to their work,” says Xiu Cravens, associate dean for international affairs and associate professor of the practice in leadership, policy and organizations.

“I see Ryan taking notes in our survey class and immediately emailing his team to see if they can actually change some of the ways they are collecting data,” Cravens adds. “He’s putting his education into action, and that’s inspiring.”

Because the Nuba Mountains region has been in conflict for so long, there’s a need to rebuild some of the basic foundations of education. Some of the project goals for To Move Mountains includes training young people as teachers; creating appropriate curriculum and texts that respect their culture; establishing school facilities; and training future administrators.

Currently, there are more than 20 students from Nuba who are being educated and trained in Uganda to be future teachers. And Vanderbilt experts are helping with many additional aspects.

“At Peabody College, one thing we really value is connecting research with practice, which is why we’re so excited about To Move Mountains,” Cravens says. “We have the right departments with ideal expertise from faculty members to help with many aspects of this project. I foresee a great partnership of mutual learning from all sides.”

For Ryan and Jazira, juggling school, a nonprofit and raising two children is a daunting endeavor. But they see the promise of changing lives and look forward to returning to Sudan.

“If I did not have a passion for education and a purpose to help my people, I might give up because this is so hard,” Jazira says. “But every mother in my place wants her children to learn. I want to learn. And we can help make this happen.”