It was at Vanderbilt that Alexandra Vierling found her passion for nursing. But the idea of working at the intersection of health care and education was a seed planted long ago.

Vierling’s two younger brothers both have special needs; Brendan, 18, has autism and Kevin, 16, has Down syndrome.

The experience with her brothers had a profound impact on her academic and future career interests. She dreams of working as a nurse practitioner, providing care for individuals with developmental disabilities.

“I have always been very interested in the way my brothers think and behave,” she says. “Brendan has had a lot of issues with services and care, and he was in and out of hospitals. It made me interested in learning more because autism is still so unknown.”

“It made me interested in learning more because autism is still so unknown.”

A Connecticut native, Vierling was first attracted by the promise of warmer Nashville weather and an exceptional reputation in special education at Peabody College. The support of the Barbara Cox Scholarship ensured she had the opportunity to attend Vanderbilt. Without it, Vierling’s not sure she would be at Vanderbilt today.

“I’ve tried to make the most of my time here,” she says. 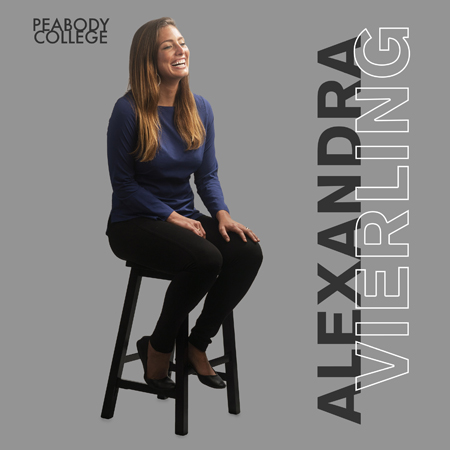 Soon after arriving on campus, Vierling declared a double major in child development and medicine, health and society. She completed her undergraduate courses in three years and was accepted into the bridge program at the School of Nursing. She will receive her bachelor’s degree in May and earn her master’s in August 2020.

Although still technically in her senior year at Vanderbilt, she spent the year taking graduate nursing courses in preparation for the nursing licensing exam this summer. Compared with undergraduate classes, she says, her nursing classes offer a unique learning experience.

Once a week she spends a 12-hour day at the hospital doing clinical rotations. She’s seen everything from transplant and cardiac patients, to live births and C-sections. Vierling even performed newborn screenings while working in the nursery.

“Everything we learn in the classroom is applied to patients in the hospital.”

“Everything we learn in the classroom is applied to patients in the hospital,” she says. “For example, you need to know a patient’s electrolyte values, or when not to give that patient medication.”

As an undergraduate Vierling’s desire to help individuals with disabilities influenced many of her extracurricular activities. In addition to various research projects, she worked for the Autism Treatment Network, served as a swim instructor for people with disabilities as part of the Nashville Dolphins aquatic program, and was involved in Autism Speaks, an organization that advocates for and supports people with autism spectrum disorder.

It’s just the type of work she sees herself doing in the future.

“A career in nursing,” Vierling says, “perfectly blends my interest in health care and passion for working with individuals with special needs into one.”