Gabriela Alvarado began her graduate program intent on studying something microscopic, but she ended up developing a passion for understanding the bigger picture of her research.

“My overall goal has always been to help people,” says Alvarado, who received her Ph.D. in microbiology and immunology from Vanderbilt this year.

“My overall goal has always been to help people.”

Alvarado’s interest in scientific research began during her time as an undergraduate at the University of Miami, where she worked at the Bascom Palmer Eye Institute. Her research focused on understanding the role of cell engulfment in retinal degeneration, which ultimately sparked her interest in applying to graduate schools.

Alvarado entered the Biomedical Research Education and Training program at Vanderbilt School of Medicine in August 2013 and was keen on pursuing research in cell biology. During the first year of the program, she rotated through four laboratories before deciding where to complete her dissertation research. Although most of Alvarado’s rotations were focused on cell biology, ultimately she joined a virology research powerhouse: the laboratory of Dr. James Crowe, the Ann Scott Carell Professor of Pediatrics, Pathology, Microbiology and Immunology in the School of Medicine and director of the Vanderbilt Vaccine Center. (Crowe also leads a worldwide network of researchers developing a universal flu vaccine.)

Alvarado’s dissertation research focused on understanding how the cells in our bodies recognize and defend themselves from norovirus, a hardy stomach bug that has sickened passengers on cruise ships and was blamed for infecting diners at Chipotle restaurants in 2017. Once someone is infected with norovirus, they are likely to spread the virus to others for an extended amount of time, even after symptoms have gone away. 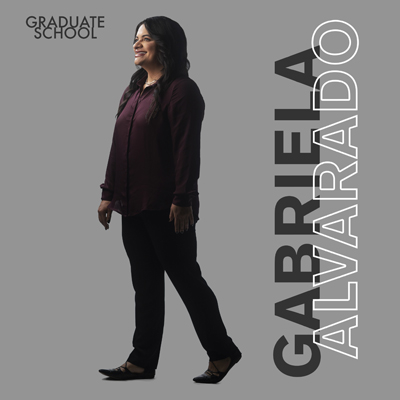 Despite its prevalence, minimal progress has been made in determining how to prevent or treat norovirus. The main reason is that methods of growing the virus in labs were ineffective until a few years ago. Human norovirus strains in mice do not fully mimic the symptoms experienced by humans. In collaboration with Crowe’s laboratory, Mary Estes at Baylor College of Medicine was able to grow human norovirus in human intestinal eteroids, offering a more accurate model to study.

Using this method of growing human norovirus to examine how human cells interact with the virus, Alvarado isolated and characterized a panel of human antibodies that recognize and neutralize a pandemic strain of norovirus. “We can use antibodies made by humans to determine the important parts of norovirus that the body recognizes in order to fight it,” she explains.

Alvarado’s experience in Crowe’s laboratory led to an internship at biotech giant Genentech and has inspired her to pursue a career in business development, aided in part by her completion of the Leadership Excellence program at the Owen Graduate School of Management while pursuing her Ph.D.

“Dr. Crowe inspired me in a different way,” Alvarado says. “He makes you think of science beyond your petri dish. That has shaped what I want to do with my life.”