Today more than 60 million people are displaced from their homes worldwide, primarily because of war, and 40 percent of them are estimated to be in or from the Middle East. The Syrian refugee crisis, for example, remains one of the largest humanitarian disasters since the end of World War II—and the U.N. reports that half its victims are children.

“A lot of these kids are born in the refugee camps, and that’s all they know,” says Aya Abou-Jaoude, a Peabody senior who grew up in the United Arab Emirates. “Some people live in these camps 20 or more years before being resettled.”

With majors in child studies and in medicine, health and society, plus a minor in neuroscience, Abou-Jaoude has always planned to become a physician. But she says an eye-opening Vanderbilt course last year about refugee resettlement helped affirm her ultimate goal: to pursue pediatric medicine, with a particular focus on refugee health.

Born in Boston and reared in Dubai by Lebanese parents—themselves displaced during Lebanon’s 15-year civil war—Aya Abou-Jaoude calls herself a “third-culture kid” who’s “100 percent Lebanese.” She graduated from the American School of Dubai, which follows a U.S. high school curriculum, and grew up in a dynamic multicultural, international community.

When Abou-Jaoude started looking for college programs that would let her focus on child psychology and early childhood development while also pursuing a premed track, Peabody grabbed her attention. A summer visit to the campus sealed the deal.

At Peabody she’s had the opportunity to work three years in the research lab of Megan Saylor, associate professor of psychology and human development, on projects involving language development in children, including bilingualism—of special interest to Abou-Jaoude, as she speaks English, Arabic, French and Spanish.

“Back home that’s the norm,” she says. “Dubai is such a melting pot of international cultures, and everybody grows up in that setting. Learning languages is what you do.”

“Back home that’s the norm,” she says. “Dubai is such a melting pot of international cultures, and everybody grows up in that setting. Learning languages is what you do.”

Abou-Jaoude’s love for the arts in high school followed her to Vanderbilt. She performs with Vanderbilt Variations, a coed a cappella group, as well as at cultural events sponsored by the Middle Eastern Student Association, for which she serves as president. In February at the organization’s largest annual event, Mahrajan MESA—which benefited famine relief efforts in Yemen—she sang in Arabic.

“The arts have always brought me joy outside of academics, and are a nice place to unwind,” she says.

Last fall she even got a taste of Broadway as part of a group of Vanderbilt students who were invited to join Tony Award–winning actress and singer Kristin Chenoweth onstage for two songs at her concert in Nashville’s Schermerhorn Symphony Center. 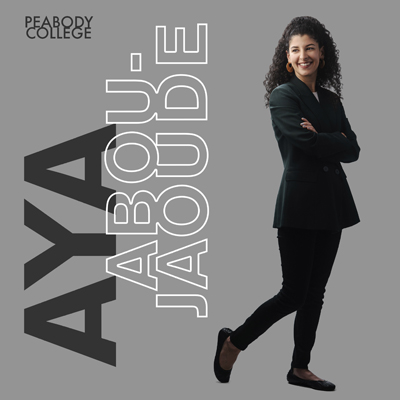 As if her academic and extracurricular loads weren’t enough, Abou-Jaoude has worked as a head resident since her second year in three different residence halls along Alumni Lawn: Cole, McTyeire, and now at E. Bronson Ingram, Vanderbilt’s newest residential college. The greatest perk of the Bronson job, she says, is the opportunity to work with the college’s inaugural faculty director, Sarah Igo, associate professor of history, political science, law and American studies.

“She’s been an amazing force, a positive source of energy and support, and she has great ideas for what the vision should be for the college,” Abou-Jaoude says. “As students move off The Commons and into this beautiful new space, we want to make sure they continue to have a sense of home and community they can be invested in.”

As Abou-Jaoude leaves Vanderbilt, she plans to spend a gap year working in a pediatric health care setting before starting medical school in the U.S.

“I want to experience the world outside academia for a bit,” she says. “School is all I know. Being able to work in a hospital setting with patients, having that one-on-one interaction before I go back to the classroom, will keep me motivated.”