Evan Suzman smiles when asked to reflect on his growth as a student-athlete at Vanderbilt. “I’m definitely a lot faster,” Suzman laughs. “I can thank my coaches for that.”

Suzman, a cross country runner for the Commodores and a member of the Class of 2019, likes to clear his mind with long, winding runs across campus. Off the course, the native New Yorker is a double major in history and child development, with a focus on the history of science.

For Suzman, Vanderbilt’s athletics and academics have offered the perfect combination for his college career.

“I really like having something to do, but I also like competing,” he says. “Our team is a really great group of like-minded guys who like to compete and like to win. But we’re all serious about our academics, which is why Vanderbilt is unique. I have friends at other schools who play their sport, and that’s it. Our team here is very passionate about running, but we’re passionate about things outside of school, too.”

“Our team is a really great group of like-minded guys who like to compete and like to win. But we’re all serious about our academics, which is why Vanderbilt is unique.”

In addition to his time on the cross country team, Suzman has spent the past two years as a research assistant in the lab of Assistant Professor of Hearing and Speech Sciences Tiffany Woynaroski at the Vanderbilt Kennedy Center for Research on Human Development. Suzman has teamed with Woynaroski’s lab to study biobehavioral approaches in neurodevelopmental disorders, specifically focusing on sensory and multisensory processing in individuals with autism.

“Our research tries to understand how early sensory differences are linked with later communication and language outcomes,” he explains.

As part of his history major, Suzman has studied the intersection of history and technology. His work through an independent study with Ole Molvig, assistant professor of history, involved the language of modernity today and its parallels to the Industrial Revolution. 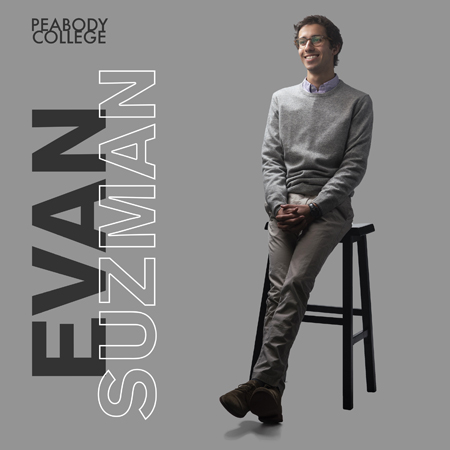 While Suzman has enjoyed his academic work, competing as a Commodore student-athlete added another element to his time in college. He will graduate as a four-time member of the Southeastern Conference Academic Honor Roll, and last fall he clocked a personal-best time of 24:44.1 in the 8K race at the SEC Cross Country Championships in Auburn, Alabama.

“I love running,” Suzman says. “If nothing else, it’s an excuse to spend an hour or two outside every day. You feel uniquely connected to nature that way. A lot of people view cross country very individualistically, but I’ve come to appreciate the team nature of the sport more since being at Vanderbilt.”

While graduation will mark the end to Suzman’s athletic career, his time at Vanderbilt remains unfinished. Next fall he begins a master’s program in biomedical sciences, an opportunity to continue his lab work and take another step toward medical school or a Ph.D. program.

“At Vanderbilt, I’ve grown a lot more comfortable in my own skin and grown more interested in subjects I am passionate about,” Suzman says. “Plus, cross country has provided me with a deep sense of camaraderie. It’s a unique kind of friendship that takes place on a team.”