Vanderbilt University’s greenhouse gas emissions dropped 12 percent per gross square foot in the 2017-18 fiscal year. The finding is among those showcased in the annual sustainability report released today by the Sustainability and Environmental Management Office in the Division of Administration.

“Integrating sustainability efforts into every project on campus is a key component of the FutureVU campus plan,” said Eric Kopstain, vice chancellor for administration. “As we continue to develop Vanderbilt’s physical environment, our goal is for each building project or initiative to bolster our standards for greenhouse gas emissions.”

The university’s GHG emissions are split between three primary sources: 41 percent from the on-campus power plant’s natural gas use and individual buildings; 25 percent from electricity purchased from Nashville Electric Service; and 33 percent from commuting, air travel, recycling and waste disposal. Total emissions for the most recent fiscal year were 183,895 metric tons of carbon dioxide equivalents. The carbon footprint is now reported on a fiscal year basis to better align with the university’s academic and financial operational cycles; it had previously been reported by calendar year.

During the 2017-18 fiscal year, the university invested in a suite of projects making a positive environmental impact, including a food-waste composting program, a dockless bikeshare program, one new LEED building, one new green roof, eight BigBelly recycling containers and three solar picnic tables.

The report also found that since 2007, the university has increased its annual recycling rate by almost 4,200 percent by continuing its focus on traditional and non-traditional recycling programs and establishing initiatives like the ReUse Surplus Program, which repurposes unneeded items owned by university departments, office and laboratories. The waste diversion rate, which tracks the amount of campus waste processed by recycling and compost programs, was 47 percent for the 2017 calendar year.

Several projects and studies designed to reduce the university’s environmental impact also are included in the report. These include the large-scale renewable energy study, which kicked off in September 2017; the BlueSky Vision study, launched in November 2017 and focused on potential building sites and energy efficiency; and a forthcoming transportation demand management study led by the new transportation and mobility office.

Last month, Vanderbilt was ranked 21st in the nation by the Princeton Review’s Green Colleges ranking. 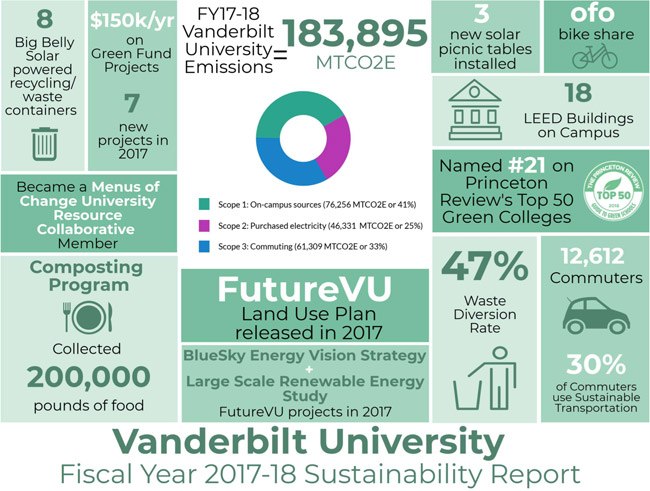