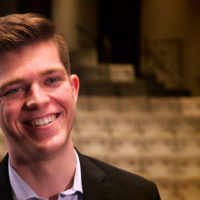 Class of 2017: Musbah Shaheen finds belonging and purpose in the college experience

May. 4, 2017—Growing up in Homs, Syria, Musbah Shaheen excelled in science, eventually enrolling at Damascus University Medical College at 17. After two years, he wanted to “stow away” that chapter of his life in the war-ravaged nation and explore something different.

Class of 2017: David Rodgers is composing a life in music

Mar. 14, 2017—Blair School of Music senior David Rodgers is graduating with a newly released album of jazz originals he composed, arranged and performed, as well as a spot in the touring band of Grammy Award-winning blues musicians Keb’ Mo’ and Taj Mahal.

Jul. 21, 2016—All children are musical and deserve the chance to make music. Blair School of Music offers lessons in piano to children as young as age 3. Suzuki violin and cello begin for children 4 and older.

May. 19, 2016—In September, beginning-level piano lessons will be offered at the Blair School of Music at one-half the normal tuition rate for rising second-grade students who enroll through the Piano Pedagogy program.

Jun. 24, 2015—There has been a change in the dates for precollege piano auditions for students with one or more years of previous study. These placement interviews are for students who plan to take private piano lessons at Vanderbilt’s Blair School during the fall 2015 semester.

May. 8, 2015—Twenty-eight retiring faculty members were recognized during Vanderbilt’s Commencement ceremony May 8, when the university honored their years of service and bestowed on them the title of emeritus or emerita faculty.

Mar. 13, 2013—During a Q&A at Vanderbilt University, freshman Michael Pollack asked his childhood idol Billy Joel if he could accompany him on “New York State of Mind.” To his surprise, Joel agreed. Pollack talks about the incredible opportunity on NBC's "Today Show."

Oct. 22, 2012—Duke University announced that Blair alumna Angela Mace, now pursuing her Ph.D. in musicology at Duke under the advisement of R. Larry Todd, has proved the authorship of a mystery “lost sonata.” The piece has often been attributed to 19th-century composer Felix Mendelssohn, although scholars have suspected the piece was actually written by his sister, Fanny Hensel.