Homelessness is not intractable. 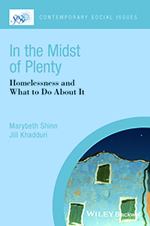 In my new book with Jill Khadduri, In the Midst of Plenty: Homelessness and What to Do About It (2020, Wiley-Blackwell), we examine research that shows how to end homelessness for people who experience it. We also show how to prevent so many people from reaching the point that they have no alternative to sleeping on the street or in emergency shelters.

In the case of families, it is important to understand that half the children in families that become homeless are 5 or younger. In fact, the age at which a person is most likely to stay in a homeless shelter in the United States is infancy.

Why are so many very young children in homeless shelters? Babies may be a blessing, but they require care that is typically costly, or that takes a parent out of the labor force. Because either choice makes it hard for young families to afford housing, too often they fall into homelessness.
Rates of homelessness drop when children enter elementary school.

Nearly half a million people in U.S. families used homeless shelters in 2017—about the same number as in 2013 and 2007. About a third of all people who use shelters belong to families with children under 17.

A recent study I co-led with colleagues at Abt Associates, the Family Options Study, showed how to end homelessness for families. Our study, funded by the U.S. Department of Housing and Urban Development and the National Institute of Child Health and Human Development, enrolled nearly 2,300 families we found in homeless shelters in 12 sites throughout the United States.

We randomly assigned the families to four options, provided by 148 different programs. Some of the families in this study simply received the sort of care that communities usually provide, starting with stays in shelter. But three years after enrolling, many of those families were not faring well.

For example, two-fifths of them had used homeless shelters recently, or reported being homeless or living doubled-up in a home with another family because they could not find or afford a place of their own.

One in six families had been separated from a child who had entered a shelter with them.

One in 10 adults reported recent intimate partner violence, and one in 10 indicated they were coping with alcohol dependence or drug abuse. Almost half of families were food-insecure, meaning they had inadequate or inconsistent access to food.

The people reporting these troubling outcomes found their way into a variety of housing and service programs that cost about $41,000 per family over a 37-month period.

Others were randomly assigned to offers of short-term rental subsidies lasting an average of six to eight months, or to longer-term transitional housing programs that provided extensive social services. We determined that they fared little better than the first group.

One program worked much better than the rest: a long-term rental subsidy that held families’ housing costs to 30 percent of their income.

Marybeth Shinn is quoted extensively on Washington, D.C., news website The Hill in an April 10 article explaining the unique vulnerability of the homeless population to the coronavirus pandemic. Read the story at vu.edu/shinn-hill.

Children in families randomly assigned to offers of subsidies were more likely to remain with their parents and less likely to switch schools, to miss school, or to have behavior problems. Their parents reported less domestic violence, psychological distress, and alcohol or drug abuse.

That is, housing subsidies reduced problems that sometimes can cause family homelessness— even without special services like case management or counseling. The one downside we detected was that the adults, mostly parents with young children, were a little less likely to be employed.

The solutions are a little different for other groups, but they all start with affordable housing. For example, supportive housing—affordable housing with services under individual control—ends homelessness for people with serious mentalmillnesses and other disabilities.

The fact that the country has nearly halved homelessness among veterans shows what can be done when we devote the necessary energy and resources. For starters, we could invest in more of the long-term rental subsidies our study found effective for ending family homelessness.

The need for affordable housing is vast. There is no county in the United States where a full-time year-round minimum-wage worker can afford the rent for a modest two-bedroom apartment. And only in 18 counties in the entire country can a worker afford a modest one-bedroom apartment—using HUD’s standard that housing should consume only 30 percent of income.

Providing enough long-term subsidies for all who need them would cost $31 billion more than current levels of spending on rental subsidies per year, but still less than 1 percent of U.S. federal spending. Our book evaluates dozens of additional ideas—like zoning reform and improvements to the safety net—to make housing more affordable.

The United States has the resources, if we choose to use them.

Marybeth Shinn is Cornelius Vanderbilt Professor of Human, Organizational and Community Development at Peabody. A version of this article was originally published by The Conversation Sept. 17, 2019. You can find it at vu.edu/shinn-research.