Rama Kumaran initially intended to study both science and flute when he came to Vanderbilt. He says he didn’t come expecting to know everything. “But I expected to do everything. I thought I knew what I wanted,” he says.

Under the tutelage of Philip Dikeman, an associate professor of flute who was a revered teacher at Blair before his death in 2017 from cancer, Kumaran realized music “was not just a thing I was interested in; it was a thing I could spend my life doing.” In 2015, after his first year at Blair, he became the youngest person to win first place at the National Flute Association’s annual Young Artist Competition and appeared on the NPR radio program From the Top.

Despite his achievements, however, Kumaran felt something was amiss.

“It wasn’t just that I’d stretched myself too thin,” he says. “I wasn’t treating my teachers with honor. I knew I needed to make some big decisions, and I wasn’t in a position to do that. So, I went home.”

Taking a gap year in the middle of his studies to return to Hemet, California, turned out to be “one of the best decisions I’ve made,” he says. During that year he directed a troupe of high school students in Shakespeare’s Taming of the Shrew through the Leadership Education Mentoring Institute. He tutored students through his own Bel Canto Studio. He worked with producer Herman Beeftink to gain studio recording experience, practiced piano and violin, and taught himself guitar and banjo, all instruments he could sing with. (“Something you can’t really do as a flute player,” he adds, laughing.) And he took care of horses on a local ranch.

Since returning to Vanderbilt, he has traveled with the Vanderbilt Wind Symphony to Colombia, South America; released a CD called Seeing It Through; and, through a stipend from his Harold Stirling Vanderbilt Honor Scholarship, last summer he attended the Medomak Conductors Retreat in Maine; the Galway Flute Academy in Switzerland; and “(R)evolution: Resonant Bodies” at the Banff Centre for Arts and Creativity in Canada.

At Blair he has found many of his most influential mentors. For his senior year, new hire Molly Barth now leads the Blair flute studio. “She is exactly the teacher I need right now,” says Kumaran, “because of her perspective on the field of contemporary music.” 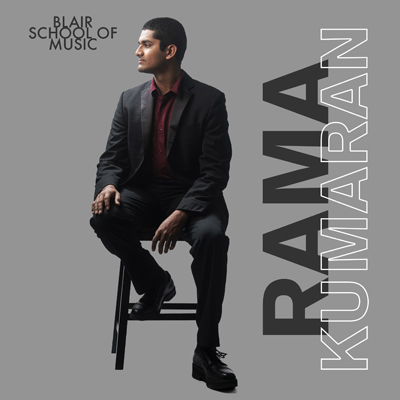 And from Tucker Biddlecombe, associate professor of choral studies, he has learned to communicate clearly. “He uses a perfect economy of language. And if I’ve developed toward anything in the last five years, it’s whittling away from excess to economy.”

Kumaran will pursue a master’s in music at the Conservatorium van Amsterdam starting in September. Until then he is mentoring a few students of his own. “One is an intensely bright 10-year-old,” he says. “I’m able to meet with him weekly and let conversations freewheel enough that we connect his math to his science to his music to his acting.

“My best mentors here are the ones who foster those kinds of connections in me,” he says. “It’s a way of paying it forward.”