A Scientific Mind and a Heart for Women’s Issues: Ananya Sharma, BA’19

Under shining stage lights, Ananya Sharma lets go of worries and allows the music to move her as she performs with Vanderbilt Lakshya, a colorful Bollywood-style fusion dance team.

“At shows like the annual Diwali Showcase, there are some parallels between dance and the scientific process,” says Sharma, a double major in molecular and cellular biology and in women’s and gender studies. “Every movement is precise, but there’s room for improvisation.”

As the only child of a university biology professor, Sharma’s talent in science came naturally. Yet, while navigating a STEM-specialized curriculum in high school, she discovered an interest in women’s studies. “It was enlightening to learn about societal constructions of gender,” Sharma says of the class that ignited her ambition to forge a career path merging medicine and innovation with social justice and equality.

“College means a bit more on a scholarship. Studying at Vanderbilt would not have been an option for me without such an opportunity.”

Sharma had always been aware of Vanderbilt, growing up in Bowling Green, Kentucky. What convinced her to come to school 67 miles south of her hometown were the Schiff Family Scholarship and the Walter Arthur Snell Scholarship, as part of Opportunity Vanderbilt.

“College means a bit more on a scholarship. Studying at Vanderbilt would not have been an option for me without such an opportunity,” she says. “It’s kept me grounded and focused on using it resourcefully.”

Sharma has made the most of the investment in her potential. During her first three years at Vanderbilt, she worked on genetics research in the laboratory of Seth Bordenstein, associate professor of biological sciences. She was co-author in a published study that explored the genetic mechanisms of bacterial suppression in parasitic wasps. The findings may offer greater insight into the spread of some infectious diseases in humans.

Outside the classroom (and lab), Sharma has served as a peer sex educator through the Margaret Cuninggim Women’s Center and as a member of the South Asian Cultural Exchange. She also was a liaison to the Vanderbilt Sexual Assault Awareness and Prevention Committee. 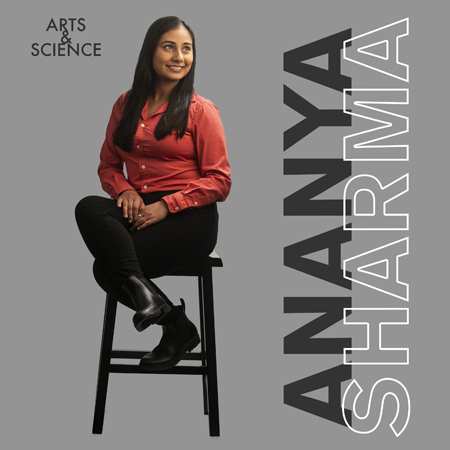 “I’ve seen my peers open up about stigmatized topics and make efforts to embrace their authentic selves, which made my experience rewarding,” she says. “I like knowing that a topic I discussed clarified unspoken questions and helped someone’s long-term health.

“My time at Vanderbilt made me a better person,” says Sharma, reflecting on the past four years. “I found a broader perspective on the world and society. I gained confidence by taking steps outside my comfort zone to help myself learn. I’ve been very humbled and grateful for having received a scholarship. It inspired me to give back so other people have the chance to transform their lives.”

Sharma is currently weighing options for medical school—including an offer of admission from Vanderbilt University School of Medicine. “I would like to go into academic medicine as a physician, pursuing education, research and health advocacy,” she says. “I’d like to focus on clarifying gender differences in cardiovascular disease. Treatment for women needs to be different than treatment for men due to their physiological differences. I want to contribute to a more holistic knowledge of heart health in women.”