A Vanderbilt University study found that LGBTQ students attending high schools with gay-straight alliances reported significantly fewer incidences of bullying based on sexual orientation or gender expression and had a greater sense of personal safety compared to students in schools without GSAs.

The new report is a meta-analysis of 15 independent studies surveying nearly 63,000 high school students. It was conducted by Robert Marx and Heather Hensman Kettrey at Vanderbilt’s Peabody Research Institute, and published by Journal of Youth and Adolescence.

The researchers found that students who attended a school with a GSA were:

“Compared to their straight and gender-conforming classmates, LGBTQ students are at an increased risk of victimization in high schools, and our work suggests that GSAs might be a promising solution to this problem,” said Kettrey, a research associate at Peabody Research Institute.

The benefits aren’t only for LGBTQ students.

“It was interesting to find that the presence of a GSA was associated with lower levels of victimization for all students, without distinguishing between students who did and did not participate in the group,” added Kettrey.

She added, “Having a GSA can send a strong message to all students that their school is a welcoming place where all people are accepted and that homophobic acts will not be tolerated.”

Gay-straight alliances are protected under the federal Equal Access Act of 1984. But parents and educators who are uncomfortable with the idea have found ways to thwart students from establishing such student-led groups.

Robert Marx, a doctoral student at Vanderbilt’s Peabody College of education and human development and lead author of the study, formerly served as a high school English teacher in Boston for five years as well as a GSA faculty adviser.

“When I was teaching I talked to a lot of parents who were afraid the group would be a distraction, or worse, some kind of conversion program or incentive for students to behave in a way they normally wouldn’t,” Marx said. “But the reality was just the opposite. With LGBTQ and straight peers supporting each other, students blossomed, grew and became more confident—and felt safer at school. I’ve seen GSAs have a positive impact on students’ lives, and having the data back that up was exciting to see.”

Students who are subjected to homophobic victimization are at risk for substance abuse, depression, poor academic performance and suicidal thoughts or actions. Having a place for students to talk and receive support from straight and LGBTQ peers can go a long way in reducing those risks, the researchers said.

“We live in a political environment in which people are being attacked for how they live and whom they love,” Marx said. “Society makes it very hard to be a queer youth. I think it’s really important to understand the healing and transformative power of being a part of a supportive community. When we join together as allies and take a stand against hate and share our lives, it forms a whole that is greater than sum of its individual parts.” 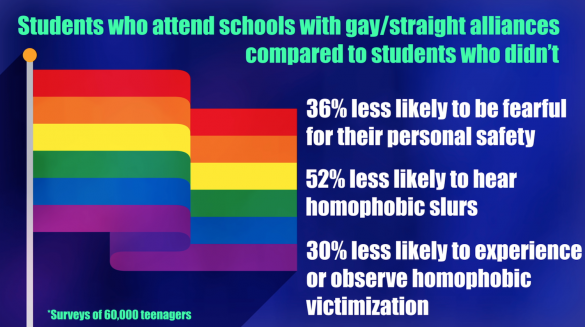