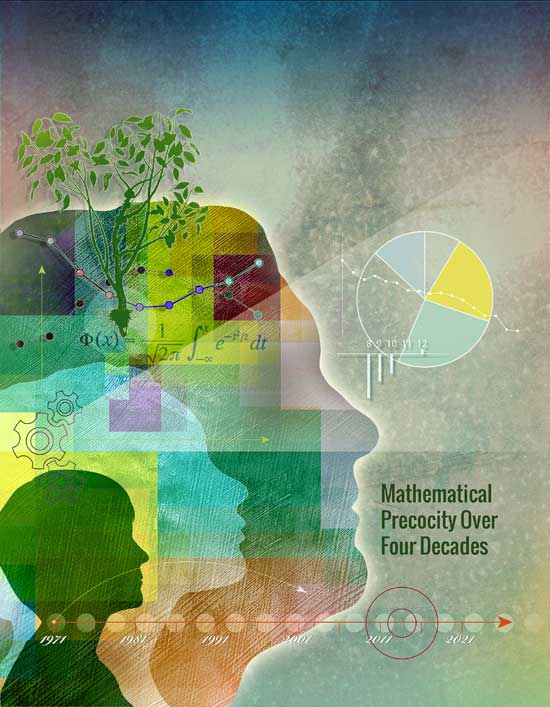 Researchers spent four decades studying a group of mathematically talented adolescents, finding that by mid-life they were extraordinarily accomplished and enjoyed a high level of life satisfaction.

Gender, however, played a significant role in how they pursued—and defined—career, family and success.

This conclusion comes from the most recent round of results from the largest scientific study of the profoundly gifted to date. The Study of Mathematically Precocious Youth is a longitudinal research project conducted at Vanderbilt Peabody College of education and human development.

“For men and women alike, we found that those who were identified as talented at this early age have gone on to generate creative contributions, become leaders in their professions, earn high incomes and be pleased with the quality of their lives,” said David Lubinski, professor of psychology and human development.

“This is the first study to document the career paths of gifted males and females over four decades in which women had meaningful high-level career options,” Lubinski said. “Early manifestations of exceptional mathematical talent do lead to outstanding creative accomplishment and professional leadership, but with notable sex differ­ences.”

Participants (1,037 males, 613 females) were identified in the early 1970s as gifted—in the top 1 percent of mathematical reasoning ability—at around age 13. The two groups, now ages 53 and 48, are well established in their careers and personal lives.

Thirty percent of the first group and 39 percent of the second group earned doctorates, compared to less than 2 percent of the U.S. population. More than 4 percent had earned tenure at a major research university, 2.3 percent were top executives at “name brand” or Fortune 500 companies, and 2.4 percent were attorneys at major law firms or organizations. Collectively they had published 85 books and 7,572 refereed academic articles and had secured 681 patents and $358 million in grants.

On measures of emotional well-being, life satisfaction, personal and career direction, and satisfaction with their relationships, both men and women had scores that were universally high.

The researchers observed differences when comparing the career paths of males and females. Men in the study were more likely to be CEOs or to be employed in information technology or fields associated with science, technology, engineering or mathematics (the so-called STEM fields). Women were more often employed in general business, elementary and secondary education, and health care—or were homemakers. Women and men were about equally represented in fields like finance, medicine and law. Roughly 90 percent of the males worked full time compared to 65 percent of the females.

Women earned about the same amount regardless of their marital status, but men who were married earned significantly more than those who were unmarried.

One area of difference was in how men and women chose to allocate their time. Men almost overwhelmingly prioritized cultivating high-impact careers that require 50 or more hours per week, while the women defined success more broadly to include family and community investment.

In answers to questions about their values, men valued full-time work, making an impact and earning a high income. Women as a group valued part-time work more often, as well as community, family involvement, time for close relationships and community service.

Men, on average, were more concerned with being successful in their work and felt that society should invest in them and their ideas, while women took a more communal approach to living and working. Men were more focused on advancing society through knowledge or the creation of concrete products, whereas women were more interested in keeping society vibrant and healthy.

Regardless of work-related gender differences, both men and women overwhelmingly agreed that family was the most important factor required for a meaningful life. Both cited family as the aspect of their lives of which they were most proud. However, they differed in how they invested in family. Men focused more on making tangible contributions, while women more highly prioritized investing their time and emotional energy.

“What is most interesting about these latest findings,” said Benbow, “is the number of variables at play. Men and women valued career choices, community and family somewhat differently in constructing lives that were satisfying, yet both were equally happy with their outcomes. Both genders used their intellectual abilities to create resources for themselves, and with those resources come choice and the ability to exercise preferences.

“It will be interesting, as time goes on, to observe whether these differences are continued in subsequent generations. We are already seeing, for example, that the academy has become more welcoming for women who wish to pursue careers in math-intensive sciences or engineering. Even the cohorts in our study had more career and life choices available to them than did their parents’ generation,” she said.

Support for this study was provided by a research and training grant from the John Templeton Foundation and by a National Institute of Child Health and Human Development grant to the Vanderbilt Kennedy Center for Research on Human Development.

Video: Are gifted children getting lost in the shuffle?