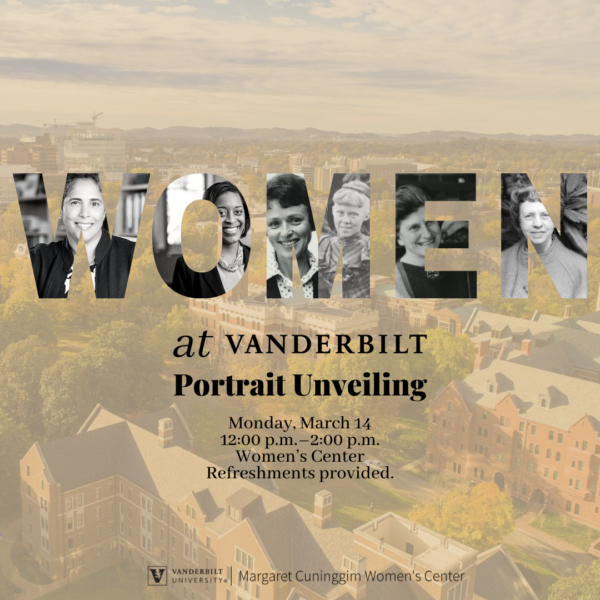 Six women who have helped shape the university and its history are being honored as part of a new Women at Vanderbilt Portrait Project at the Margaret Cuninggim Women’s Center. The portraits, commemorating women from the 19th century through today, will be unveiled at an event on March 14.

“This project helps tell the stories of women who have had a monumental impact at Vanderbilt,” said C. Cybele Raver, provost and vice chancellor for academic affairs. “These beautiful new portraits honor and elevate these role models, and hopefully inspire future generations here at Vanderbilt.”

The honorees include Board of Trust member Shirley Collado and Vanderbilt Athletic Director Candice S. Lee. Nominees were chosen by a committee of Vanderbilt faculty and staff.

“I hope when students come into the Women’s Center and see the portraits, they take time to learn more about these unique and compelling women and ask questions about them and the rich role they had and are still having in Vanderbilt’s story,” said Rory Dicker, director of the Margaret Cuninggim Women’s Center.

Werthan was the first woman to serve on the Vanderbilt Board of Trust, beginning in 1964. While an undergraduate at Vanderbilt in the mid 1920s, Werthan was president of the newly formed Women’s Student Government Association, the Women’s Athletic Association, and of her sorority, Alpha Epsilon Phi. Each year the Women’s Center presents the Mary Jane Werthan Award to an individual who has significantly contributed to the advancement of women at Vanderbilt. She died in 2002.

Cuninggim was Vanderbilt’s last dean of women. When the positions of dean of men and dean of women were eliminated following Title IX of the Education Amendments of 1972, she became the first woman to be named dean of student services at Vanderbilt. The Margaret Cuninggim Women’s Center, which honors her legacy, was founded in 1978. The Nashville native died in 1986.

Sallie McFague was a renowned Christian theologian and was named the first woman dean of the Vanderbilt Divinity School in 1975.

McFague was a renowned Christian theologian and was named the first woman dean of the Vanderbilt Divinity School in 1975. This also made her the first female dean of any theological school in the United States. The influential scholar on feminist theology died in 2019.

She was a member of the inaugural class of students from the Posse Foundation and the first Posse Scholar to receive a doctoral degree, serve as a college president and become a trustee of an institution of higher education.

Collado is president emerita of Ithaca College. She was a member of the inaugural class of students from the Posse Foundation and the first Posse Scholar to receive a doctoral degree, serve as a college president and become a trustee of an institution of higher education.

Lee is a “Triple ’Dore,” earning undergraduate, master’s and Ph.D. degrees from Vanderbilt Peabody College of education and human development. She is the first woman to serve as vice chancellor for athletics and university affairs and athletic director, as well as the first Black woman to head an SEC athletics program. She has been an inspirational leader in athletics and the wider Vanderbilt community ever since arriving on campus as a student-athlete in 1996.

The Women’s Center commissioned three Nashville artists to create the portraits. They  are Alison Fullerton, Diane Davich Craig and Donna Woodley. Woodley’s dramatic portraits were showcased in a special virtual exhibit by the Vanderbilt Divinity School in honor of Black History Month.