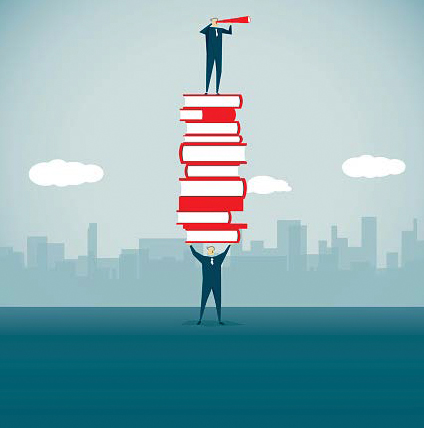 That support helped usher in Land Grant colleges and the vast economic and industrial expansion that followed a generation later.

Similarly, the GI Bill in the wake of World War II—and later, massive government research spending connected to the Cold War—spurred a “golden age” for American universities and industries extending well into the 1980s.

That, in turn, gave rise to a widely educated and prosperous U.S. middle class.

Today, publicly supported higher education is once again changing. The college student of past eras is now anything but typical.

An influx of older, more diverse Americans across a broad socioeconomic spectrum—many of them going to school while holding down full-time jobs—are among those most in pursuit of college degrees.

At the same time that higher education demographics are shifting, states have curtailed their support for these institutions, leaving many students and their families responsible for a larger portion of postsecondary education costs than ever before.

“It is a 19th-century system relying on 20th-century policies to operate in the 21st century.” Nevertheless, Loss says, higher education has changed and adapted over time. “And we shouldn’t believe it won’t continue to do so.”

Some of the leading efforts to understand the changing nature of public higher education, and implement policies to address those shifts, are being directed by Peabody faculty and alumni.

From Civic Good to Economic Survival

Brent Evans, assistant professor of higher education and public policy, whose research focuses on factors related to college access and student success, points out that lawmakers once centered their attention on the public gains that could be realized by widening access to higher education.

“The message was that college-educated people made better health care decisions, were more likely to vote, and were prepared to be better civic leaders,” Evans says. As such, funding state-supported higher education became a priority.

During the past several decades, however, state funding for higher education has been crowded out by more pressing needs.

According to a report issued last fall by the Deloitte Center for Higher Education Excellence, spending for higher education accounted for about 9 percent of state budgets in 2014, down from 15 percent in 1990. Instead, states have significantly increased spending on Medicaid and the criminal justice system, the Deloitte report says.

With a historically low unemployment rate for workers with a bachelor’s degree or higher—currently hovering around 2 percent—a postsecondary education offers protection in a rapidly moving economy. “A college degree provides graduates with the ability to be nimble and adaptive as society, the labor market and the economy change over time,” Boatman says.

Beyond simple funding allocations, however, attitudes about the role of publicly supported higher education have shifted, Evans points out. “Today’s message is definitely one geared more toward a private market return versus a benefit to the overall society.”

“Not everyone should borrow to go to college. We have to make sure … they can afford to take out loans.”
–Brent Evans

In part, that change has been driven by lawmakers themselves, who justify higher-education spending to attract employers in search of a skilled workforce. The increasingly career-focused nature of public higher education should not be dismissed, says Angela Boatman, assistant professor of higher education and public policy, whose work examines remedial education and college degree completion.

While record numbers of students have enrolled in postsecondary institutions in recent years—although those numbers have cooled somewhat with the strong economy—just over half of those go on to complete a degree, often leaving students mired in debt and no better off than before, and sometimes even worse.

Research shows that people who complete a college degree typically pay off their loans, Evans says. For those who take on debt, but do not finish, the economic consequences tend to be far more negative, both for the individuals themselves and the economy as a whole.

In the first quarter of 2018, for example, levels of U.S. student-loan debt hit a new high of $1.5 trillion, worrying lawmakers and others if a substantial portion of it cannot be repaid.

For Evans the bottom line is this: “Not everyone should borrow to go to college. We have to make sure people—future students—have an accurate assessment of whether or not they can afford to take out loans.”

Despite the potential debt risk, the availability of student loans has made more postsecondary educational opportunities possible for students. That doesn’t necessarily mean all students are academically ready for college, however. Boatman says it’s critical that states work to prepare students to be successful in their college-level courses beginning in high school, through high school-level interventions and better alignment of K–12 curricula and standards with higher education systems.

“We must ensure that the programs and policies … work intentionally to shrink gaps in opportunity and attainment by race and socioeconomic status.”
–Angela Boatman

Boatman points to intervention programs like Tennessee’s Seamless Alignment and Integrated Learning Support (SAILS) program, which identifies students struggling with math in 11th grade and offers a remedial course during 12th grade designated to address these gaps in knowledge. Programs like this help reduce the need for college-level remediation, which often delays student progress and costs students, families and schools more money.

Boatman also notes that college students today are no longer a homogeneous group. Policy decisions have helped diversify college classes by gender, race and socioeconomic status. “We must ensure that the programs and policies we develop and implement not only help students to earn degrees, but also work intentionally to shrink gaps in opportunity and attainment by race and socioeconomic status,” she says. “Otherwise we’re perpetuating a failure in our education pipeline that we should not accept.”

Mike Krause, MPP’10, executive director of the Tennessee Higher Education Commission and the Tennessee Student Assistance Corp., says changes in the workplace itself are driving the demand for higher education.

“Today a technical credential of some sort beyond high school is necessary to gain access to the type of career with a salary that allows one to successfully raise a family.”
–Mike Krause

“Thirty years ago, many jobs were available to Americans with a high school degree,” Krause says. “Today a technical credential of some sort beyond high school is necessary to gain access to the type of career with a salary that allows one to successfully raise a family.”

In 2015, under the direction of former Gov. Bill Haslam, Tennessee enacted a sweeping set of higher education reforms that put it in the national spotlight. The initiative that has received the most attention is Tennessee Promise, a full-scholarship program that pays for any state resident pursuing a two-year college degree. In addition to funding, Tennessee Promise offers mentoring to students who may struggle to complete a degree.

“Tennessee Promise began with and has kept a singular message that if you live in this state and want to go to a community college, we will help you do it tuition-free,” Boatman says. “It says ‘we support your efforts to further your education,’ which is a very powerful message to students.”

In the years since Tennessee Promise began, the state has continued its reform efforts through a program called “Drive to 55,” an ecosystem focused on student achievement and employer needs. One area the state has focused on recently is helping Tennessee adults with some college experience to complete their degrees.

Nearly 20 states now emulate Tennessee by providing programs that ensure free community college access to residents. One of the most recent is New Jersey, where the Community College Opportunity Grant Program launched in January 2019.

At the helm of that program implementation is Zakiya Smith Ellis, BS’06, who received the Vanderbilt Alumni Association’s 2017 Young Professional Achievement Award. A former education policy adviser in the Obama administration, Smith Ellis was named New Jersey’s secretary of higher education in 2018.

Under New Jersey’s Community College Opportunity Grant Program, students who earn less than $45,000 in annual income are eligible for support that covers tuition and fees. Unlike most college promise programs, New Jersey’s covers part-time students, many of whom are working adult learners.

“For years politicians and higher-education officials have said we’re going to make college more affordable. We have done some things, but not enough. It was time for us to embrace free community college as a radical solution,” Smith Ellis says. “Employers want to locate where there is a highly educated workforce. At 50 percent, our state has a higher share of college graduates per capita than any other state, but we need to do more to continue being attractive to employers and to make good opportunities available for our residents.”

Will efforts like those being tested in Tennessee, New Jersey, and in states across the country help make higher education more relevant for students, employers and local communities? Boatman says it’s always a challenge to match large-scale policies with the real-life ways people experience them.

“But understanding students’ actual lived experiences,” she says, “will help us design policies that meet real needs and make the most impact on people’s lives. There is no more important work we can do than that.”