Common Core math is missing the mark by not emphasizing pattern abstraction, according to new Vanderbilt research.

Pattern abstraction—identifying a pattern of colors or shapes and replicating it with different colors or shapes—is an important building block for mathematical proficiency, researchers believe. Pattern abstraction activities are important because they teach students to look for regularity and rules, which are critical components of mathematical reasoning, according to Bethany Rittle-Johnson, associate professor of psychology at Vanderbilt Peabody College of education and human development.

“Patterns are a pervasive and important, but understudied, component of early mathematics knowledge and should be kept in mathematics content standards,” said Rittle-Johnson, lead investigator for a series of studies on pattern abstraction.

“The Common Core standards are evidence-based, and when the standards were written, there was very little research on learning about patterns,” she said. “Recent research, including our own, indicates that patterns are an important component of early mathematics learning and should be emphasized in the standards.”

In three recent studies, Rittle-Johnson and her team tracked 4- and 5-year-olds’ pattern knowledge over time and gathered information on their exposure to patterns (including hand-motion games, board games, computer games, apps and manipulatives). 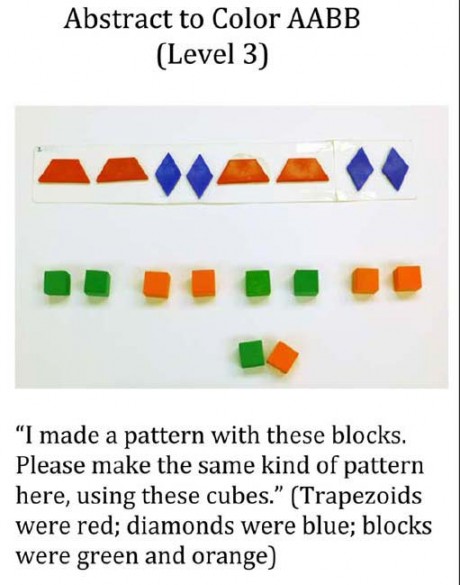 “We found that the children could succeed with more sophisticated pattern activities than they were frequently encouraged to do at home or at school,” Rittle-Johnson said. “Over the course of the pre-school year, their ability to duplicate, extend and abstract patterns improved substantially.

“Parents and teachers regularly asked children to duplicate and extend patterns, but often did not ask children to abstract (recreate them with different colors or shapes) patterns,” she said.

The study results support the idea that teachers and parents should emphasize more sophisticated patterning activities like pattern abstraction and encourage children to talk about the part of the pattern that repeats, Rittle-Johnson said.

“By participating in these tasks, which are disguised as play, they may be better prepared for more complex mathematical concepts later on.”

Read more at “Beyond Numeracy in Preschool: Adding Patterns to the Equation,” online now at Early Childhood Research Quarterly.