Here are a few astronomy questions that have appeared on the popular quiz show Jeopardy: (1)  Voyager II captured a photo of the storm called the Great Dark Spot on this ice giant; the clouds are believed to be condensed methane particles. (2)  It orbits the sun at an average distance of .3871 astronomical units, the lowest average of all the planets. (3)  Created by millions of years of eruptions, this now-extinct Martian shield volcano is the tallest mountain in our solar system. According to Professor of Astronomy David Weintraub, providing answers to questions like these are about all most introductory astronomy textbooks are good for. [rquote]“They don’t actually teach anybody anything, except to give them the answers to some Jeopardy and Trivial Pursuits questions.”[/rquote] 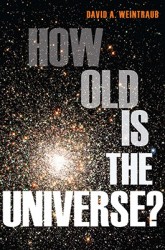 So several years ago he and Rob Knop, a colleague who felt similarly and now teaches at Quest University Canada, began discussing how they could redesign “Astronomy 101” so undergraduates would actually learn something about how astronomy works. They agreed that, instead of exposing students to a potpourri of astronomy facts, such a course should concentrate on a single “big question” and explain how astronomers have come up with the answer. When it was Weintraub’s turn to teach introductory astronomy, the big question he settled on was the age of the universe. He developed the course the hard way, by keeping one step ahead of the students. After he completed the semester, he realized that the material would make a good popular science book if he removed the mathematics.  After four years and after using the evolving set of materials to teach his class five times, the project came together as a non-mathematical manuscript suitable for a wide readership (for his class, students also receive short, mathematical supplements for most chapters). That manuscript became the basis of a book titled “How Old Is the Universe?” that was published last February by Princeton University Press. It has just become available in electronic form. “There is actually quite a bit of information in the book that many astronomers don’t know because they don’t know the history of astronomy very well,” Weintraub said. You can think of his book as an episode of “CSI: Universe.” He traces the several independent chains of logic that have led scientists to the conclusion that the universe is 13.7 billion years old, plus or minus 10 percent.

One method involves the expansion of the universe. For some time, astronomers have realized that the universe is expanding: All the galaxies surrounding the Milky Way are moving away at a significant clip. This is one of major reasons why cosmologists believe that the universe began in a “Big Bang” and has been expanding ever since. Using powerful instruments like the Hubble Space telescope, astronomers have been able to look at objects dating back most of the way to the Big Bang. This has allowed them to estimate the rate that the universe has been expanding in the past. When they take this information and project it backwards, they find that universe shrinks to a single point somewhere between 13.5 billion and 14 billion years ago. A second method involves the age of white dwarfs. These are small dense stars that are the final stage in the evolution of small- and medium-sized stars. (Large stars end their lives in tremendous explosions called supernovae.) Initially all stars are powered by hydrogen fusion but, after they run out of fuel, white dwarfs keep shining because they are hot. However, hot things cool off. Much like a baked potato when it is removed from the oven, white dwarfs gradually cool at a rate that astronomers have calculated and they have found that “there are no cool white dwarfs older than 15 billion years,” Weintraub said. In fact, the oldest white dwarfs have ages that range from 13 billion to 13.5 billion years. The third approach comes from the study of star clusters. As with white dwarfs, astronomers have found that the oldest star clusters are 13 billion to 13.5 billion years old.

The fourth and final approach involves the cosmic microwave background (CMB) radiation. This is a faint microwave signal that comes from all points in the sky that was accidentally discovered in 1964. Since its discovery, scientists have explained it as fossil radiation left over from an early stage in the development of the universe and is considered to be strong evidence for the Big Bang model. During the first 300,000 years or so, the universe was filled with a foggy plasma. As it expanded and cooled, however, hydrogen atoms began to from the protons and electrons and, as a result, space began increasingly transparent. The CMB consists of light that has been traveling through space for billions and billions of years that was released when most of the hydrogen atoms formed. By analyzing subtle variations in the intensity of this radiation, scientists have come up with an age of the universe of 13.72 billion years.

In March and April, Weintraub gave a series of six lectures to Vanderbilt’s Osher Lifelong Learning Institute that were videotaped which you can view below. Click on the play button below, then the playlist button to scroll through all six videos: