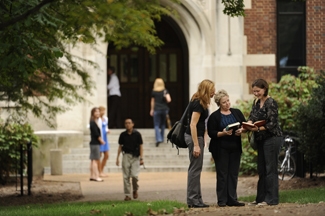 A new report from the National Research Council offers insights into 31 doctoral programs at Vanderbilt University, and finds the programs to be competitive with those at other top research institutions in the United States.

The report is based on data collected for the 2005-2006 academic year on 20 key variables identified by the NRC as indicative of the quality of Ph.D. programs. It includes data on over 5,000 doctoral programs in 62 fields at 212 universities. It is the largest such evaluation of its kind and includes information on faculty research productivity, institutional support for doctoral students and the diversity of faculty and students, among many other characteristics.

The Vanderbilt programs that were evaluated fell broadly within the biological and biomedical sciences, engineering, the humanities, the physical sciences and the social sciences.

“For the last decade, Vanderbilt has been devoting increasing attention and resources to its Ph.D. programs throughout the entire campus,” Dennis Hall, vice provost for research and dean of the Graduate School, said. “All of that effort and emphasis has placed graduate education at Vanderbilt on a steep upward trajectory.”

“We’re really encouraged by the progress we’ve been seeing,” Hall said. “While the NRC data is by now somewhat dated, it nonetheless makes possible detailed comparisons with other institutions, something that will be useful as we continue to evaluate our graduate programs and work to strengthen them.”

Though the report does not provide absolute rankings of programs, the data indicate that several Vanderbilt programs, including those in English, French, material science, mathematics, microbiology and immunology, molecular physiology and biophysics, pharmacology, religion and Spanish, were ranked highly for characteristics that faculty in those fields rated as most important to the overall quality of a program. (This ranking is referred to as the “S” ranking in the report).

“This large dataset will enable university faculty, administrators and funders to compare, evaluate and improve programs, while prospective students can use the data to help identify programs best suited to their needs,” the NRC stated in a press release. “Universities will be able to update important data on a regular basis, so that programs can continue to be evaluated and improved. The assessment also illustrates how the data can be used to rank the quality of programs based on the importance of particular characteristics to various users. It does not include an authoritative declaration of the ‘best programs’ in given fields, as the study committee concluded that no single such ranking can be produced in an unambiguous and rigorous way.”

The NRC last published a national assessment of U.S. doctoral education in 1995.

The assessment includes a report describing the approach used and general findings about U.S. doctoral education, as well as an Excel spreadsheet containing the data and illustrative rankings. The report, spreadsheet and a guide to the study methodology can be downloaded at http://www.nap.edu/rdp.

Data Provided by the Assessment

The assessment offers data for each program on the following 20 characteristics: