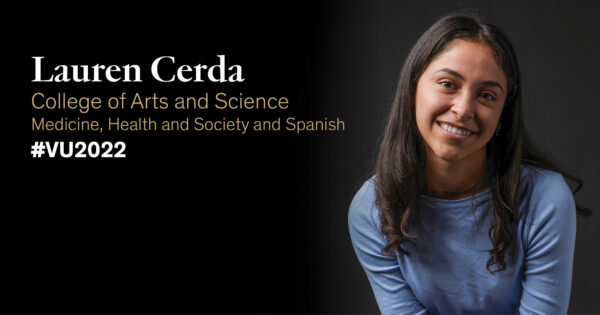 Discussing a diagnosis with a doctor can be scary and confusing even under the best of circumstances. But when a language barrier is involved, the likelihood of a misunderstanding is far greater. Medicine, health and society and Spanish double major Lauren Cerda hopes someday to alleviate that problem as a translator and bilingual physician.

Cerda honed her pre-med aspirations after interning at a Houston-area hospital where she witnessed the desperate need for language help on the provider and patient sides. She has since volunteered as a medical interpreter in multiple Nashville clinics including Clinica Hispana La Paz, Academy Children’s Clinic and the Meharry Medical College’s Salt Wagon Clinic. Last fall she also spent an immersive semester in southern Spain through the Global Education Office, where she serves as a peer adviser.

Cerda credits a Spanish medical interpretation class with Professor Lori Catanzaro for taking her passion for holistic care to a new level.

“Half of the class included learning medical terms in Spanish, but the other half was really looking at cultural differences in Spanish-speaking populations from Central and South America and examining different ideas about what the physician–patient relationship should be,” she said. “In many Spanish-speaking cultures, medical care is not as transactional as it is in the U.S. It’s more of a relationship.”

A project through the Arts and Science Honors College introduced her to the Vanderbilt community garden, where she’s found belonging and connection.

“I met so many people who I probably would not have crossed paths with before,” she said. “In that community I’ve learned so much from my peers about sustainability and environmental awareness. And the kind of careers that they’re going into that I would hope to collaborate with as a physician to show how interdisciplinary the field of health can really be.”

Cerda and other students at the Vanderbilt community garden.

Through the Vanderbilt community garden, Cerda and other members connected with Vanderbilt Next Steps students to work on a craft.