Vanderbilt first-year students recently met with Buddy Creech, BS’95, MPH’06, director of the Vanderbilt Vaccine Research Program and associate professor of pediatrics, for a special virtual chat to answer some of their COVID-19 vaccine questions. The event was coordinated through The Martha Rivers Ingram Commons.

Creech and his team participated in several NIH-funded treatment trials of COVID-19, conducted phase 3 studies of the Moderna mRNA vaccine and the Johnson & Johnson adenovirus-vectored vaccine, and have been developing new ways to test immune responses in patients who have recovered from the highly contagious virus. Creech said his team soon will launch pediatric studies.

“One of the responsibilities that I think we have in academia is to be a source of truth for those hard issues that surround us. Fewer and fewer people have a deep trust of expertise,” Creech said. “I come to you as someone who’s worked on this a lot, and I want to try to clear up some of those misconceptions.”

How did Vanderbilt get involved in the COVID-19 vaccine trials?

CREECH: We run a vaccine unit, and every time there’s a pandemic, we are called into action. Vanderbilt’s home to one of 10 such research units in the country, and we do all kinds of research from malaria to flu to tuberculosis to any number of pathogens. We also are home to one of the few coronavirus laboratories in the country, led by Dr. Mark Denison. He has been working on coronavirus pathogenesis for over three decades; his laboratory is critically important when more dangerous versions of coronavirus emerge. It’s a great example of how important basic science discovery is because we learn the tools that we then need for subsequent clinical trials and clinical care.

How were these vaccines created so quickly?

CREECH: Even though these are new vaccines, they are the culmination of more than two decades worth of work that coincided at the right time in the right place. The first time I did an adenovirus vaccine study like the Johnson & Johnson one was for a malaria vaccine back in 2005. So other than lab nerds like us, people just haven’t heard about this research because there were no commercial products associated with it, until now.

A second reason is that we did the trials in a different way. We went ahead and wrote the phase 2 trials and the phase 3 trials while the phase 1 trials were still happening to speed up the approval process.

In a different setting, the drug company would wait till the phase 1 trial was completed and then they’d go to investors and ask for more money for the next phase. So instead of everything happening in series, we did a lot of things in parallel, including making large amounts of vaccine, even if it doesn’t work. Johnson & Johnson has been making tens of millions of vaccine doses for the last six months, and until this week, they didn’t even know if it worked. We now know it works, and those vaccines are being distributed. So we removed some of the financial disincentives to vaccine development, which was huge.

The COVID-19 vaccines have high percentages of effectiveness. Is this common?

CREECH: Yes. When vaccines are given correctly, we’ve seen this type of effectiveness or efficacy for other vaccines, like mumps, rubella, measles and polio. Some of the oldest vaccines, like tetanus, diphtheria and other “old school” vaccines, work remarkably well—close to 100 percent.

Then we went through a wave where we really started to tackle some hard stuff, like human papilloma virus, ear infections and meningitis germs like pneumococcus. Those are harder, and those vaccines don’t necessarily give you 100 percent protection.

Now that our technology is advancing, this may be another golden age of vaccinology because even though the COVID vaccines are new to the market, we have decades of information to draw on from all that research.

Am I protected after taking the vaccine?

CREECH: It’s important to know that this vaccine takes a little while to work. It takes at least one dose, but preferably two; better said, two doses give full immunity. But it still takes a good week or two after that second dose to have that highest level of immunity. In the Johnson & Johnson data that just came out, the efficacy of the vaccine increased steadily over the first month after vaccination.

So it shows you that there’s some maturation of the immune response that has to happen before you’re actually protected. Which means we have to tell people that once you’re vaccinated, that doesn’t mean the next day you get to fly cross country back and forth without a mask. It doesn’t mean that you’re suddenly completely immune to SARS-CoV-2. Rather, it means, OK, now the time starts ticking and, over the next month or so, you’re going to develop immunity. That’s going to keep you from being put in the hospital because of your COVID. In the meantime, we have to caution people you can still get COVID or you can still have symptoms that look a whole lot like COVID.

When could college students begin to get the vaccine?

CREECH: Because college students are predominantly a healthy population, you’re not very susceptible, but, gosh, there’s a lot of you. We know we’re giving about a million and a half doses every day, but there are so many people over 65 who don’t even have dates yet to be vaccinated. So unless there were some really remarkable things that were to happen that were unique to college students, I think that the 18-24 age range is going to be pretty low on the prioritization scheme unless you’re doing things that are particularly high risk, like working in labs with COVID-positive samples or COVID-positive patients in a research study or something like that.

CREECH: Oh, that’s a cool question. I’ll tell you three things. The first one is that health care is going to change forever. Our ability to do telehealth and to leverage technology so that people don’t have to drive two hours to see us will be a lasting change.

No. 2 is I think for a while we’re going to be much quicker to don masks during respiratory virus season. And it may not be all of us, but it might be a good number of us and it might be in certain situations like the classroom. Although the classrooms haven’t been a primary site of transmission, it’s a lot of other places, like social gatherings or places where people aren’t properly masked and distanced. But I think people are going to be quicker to put on a mask if they’ve got the sniffles or if they’ve been exposed to somebody who’s had a cold.

The third one is going to be that we’re going to do a better job preparing for the next major health emergency by putting into play some basic rudimentary-type things so that when the next pandemic comes, we’re not reinventing the wheel. We’re going to have protocols in place. We’re going have vaccine distribution plans in place. We’re going to have manufacturing facilities that are in place so that we don’t have to make it up again. Keep in mind that the last time we did this in earnest was 1918, and we didn’t have the same tools back then. We had a few punctuated epidemics through the 20th century, and certainly we had the 2009 flu pandemic. But all of that pales compared to this. So there will be some infrastructural things that we do that get us ready for the next one. 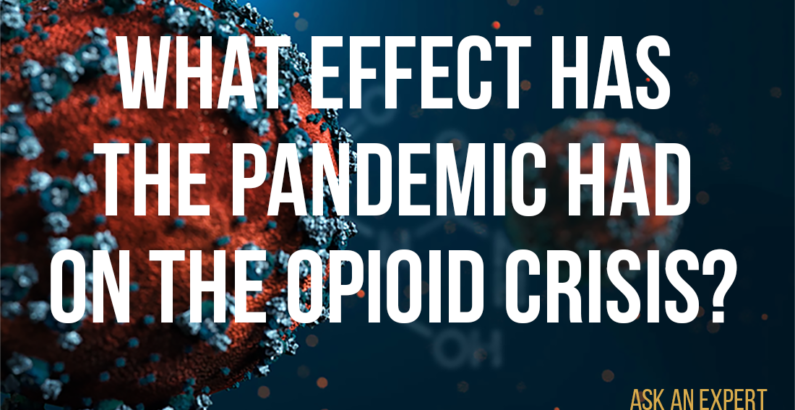 Ask an Expert: What effect has the pandemic had on the opioid crisis?

TweetHear from the researcher who helped lead trials of two f the COVID-19 vaccines as he answers questions from @Vanderbiltu first-year students.