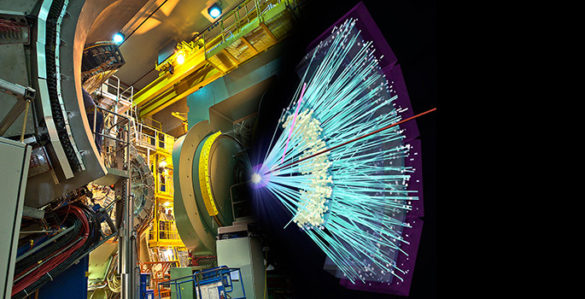 The primordial cosmic soup, from which all the visible matter and energy in the universe originally formed, may be far easier to create than scientists had previously thought.

In a series of experiments at the Relativistic Heavy Ion Collider (RHIC) at Brookhaven National Laboratory, physicists have found the signature of this primordial liquid, called the quark gluon plasma (QGP), in subatomic collisions at much lower energies and in much smaller volumes than those at which it has previously been detected.

Twelve years ago, scientists at RHIC determined that minute quantities of QGP were being created in subnanoscale explosions produced by bashing gold ions together at relativistic velocities.

Scientists measure the energy released in nuclear collisions in terms of electron volts. The gold-gold ion collisions in which the exotic plasma was initially discovered carried 200 billion electron volts, which created temperatures of about four trillion degrees Celsius, about 250,000 times hotter than the center of the sun. Since then QGP has also been produced by CERN’s more powerful Large Hadron Collider in Geneva, Switzerland, in collisions with energies as high as five trillion electron volts, corresponding to temperatures of more than 5.5 trillion degrees C.

These experiments revealed that the plasma behaved as a perfect liquid, rather than as a gas as physicists had predicted. As a result, it has a distinctive flow pattern that the scientists learned to identify.

“With these results in hand, we wanted to try smaller and smaller systems at lower energies in order to test the limits of the perfect-liquid behavior,” said Vanderbilt Professor of Physics Julia Velkovska, deputy spokesperson of the RHIC PHENIX collaboration, which performed the latest measurements.

Over a period of about five weeks in 2016, the PHENIX team collected data from collisions of extremely lightweight particles (deuterons, made of one proton and one neutron) with gold ions at four different energies: 200, 62.4, 39 and 19.6 billion electron volts.

“The flow pattern of particles produced in the collisions between deuterons and gold nuclei at lower energies is similar to what we find when we produce a quark-gluon plasma at the highest energies with the heaviest projectiles,” said Vanderbilt doctoral student Qiao Xu, who participated in the analysis. “However, we need more evidence before we can be certain that the same mechanism is at play in the less violent collisions and that this is in fact QGP.”

Theoretical calculations using hydrodynamics that invoke the perfect-liquid behavior agree well with the flow patterns observed in the data. In this hydrodynamics description, the volume of the plasma produced is much smaller (about 100 times smaller) and exists for a much shorter time (about one-fifth the time) than in higher-energy gold-gold collisions.

“There is another aspect to all this,” added Stevenson Professor of Physics Victoria Greene, who is also a PHENIX team member. “As the volume gets smaller and smaller, concepts like temperature and energy density get more and more difficult to define. The significant implications of our latest findings are that we have set a new record on how small we can go in volume and time-duration and still see these distinctive hydrodynamic flow patterns.”

There is an alternative explanation: something called color-glass condensate. This is a kind of matter that physicists theorize should be produced when particles are accelerated to energies close to the speed of light. It consists of a very high concentration of gluons, subatomic particles that bind quarks together.

Color-glass condensate is proposed as a universal form of matter that describes the properties of all high-energy, strongly interacting particles. However, the theoretical calculations of how it should behave in these low-energy collisions is not complete and so cannot yet be compared to the experimental results.

The PHENIX collaboration has submitted the findings in two separate papers to the journals Physical Review Letters and Physical Review C, and presented the results at a meeting in Krakow, Poland, in September.

Scientific paper: “Measurements of azimuthal anisotropy and charged-particle multiplicity in d+Au collisions at √sNN=200, 62.4, 39, and 19.6 GeV”