Are the world’s religions ready for E.T.?

In 1930, Albert Einstein was asked for his opinion about the possibility of life elsewhere in the universe. “Other beings, perhaps, but not men,” he answered. Then he was asked whether science and religion conflict. “Not really, though it depends, of course, on your religious views.”

Over the past 10 years, astronomers’ new ability to detect planets orbiting other stars has taken this question out of the realm of philosophy, as it was for Einstein, and transformed it into something that scientists might soon be able to answer. 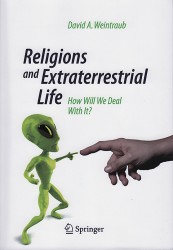 Realization that the nature of the debate about life on other worlds is about to fundamentally change led Vanderbilt Professor of Astronomy David Weintraub to begin thinking seriously about the question of how people will react to the discovery of life on other planets. He realized, as Einstein had observed, that people’s reactions will be heavily influenced by their religious beliefs. So he decided to find out what the world’s major religions have to say about the matter. The result is a book titled “Religions and Extraterrestrial Life” (Springer International Publishing) published this month.

“When I did a library search, I found only half a dozen books and they were all written about the question of extraterrestrial life and Christianity, and mostly about Roman Catholicism, so I decided to take a broader look,” the astronomer said. As a result, his book describes what religious leaders and theologians have to say about extraterrestrial life in more than two dozen major religions, including Judaism, Roman Catholicism, the Eastern Orthodox churches, the Church of England and the Anglican Communion, several mainline Protestant sects, the Southern Baptist Convention and other evangelical and fundamentalist Christian denominations, the Religious Society of Friends (Quakers), Seventh Day Adventism and Jehovah’s Witnesses, the Church of Jesus Christ of Latter-Day Saints (Mormons), Islam and several major Asian religions including Hinduism, Buddhism and the Bahá’í Faith.

The remarkable progress that astronomers have made at detecting exoplanets gives the issue of extraterrestrial life a new sense of immediacy. In 2000, astronomers had detected 50 planets orbiting other stars. Today, the number has grown to more than 1,000. If the rate of discovery keeps up its current pace, astronomers will have identified more than a million exoplanets by the year 2045.

“If even one exoplanet shows signs of biological activity – and those signs should not be hard to detect, if living things are present – then we will know Earth is not the only place in the universe where life exists,” Weintraub points out. “Although it is impossible to prove a negative, if we have not found any signs of life after a million exoplanets have been studied, then we will know that life in the universe is, at best, exceedingly rare.”

Public opinion polling indicates that about one fifth to one third of the American public believes that extraterrestrials exist, Weintraub reports. However, this varies considerably with religious affiliation.

Belief in extraterrestrials varies by religion

Of the Christians, more than one third of the Eastern Orthodox faithful (41 percent), Roman Catholics (37 percent), Methodists (37 percent), and Lutherans (35 percent) professed belief in extraterrestrial life. Only the Baptists (29 percent) fell below the one-third threshold.

Asian religions would have the least difficulty in accepting the discovery of extraterrestrial life, Weintraub concluded. Some Hindu thinkers have speculated that humans may be reincarnated as aliens, and vice versa, while Buddhist cosmology includes thousands of inhabited worlds.

Weintraub quotes passages in the Qur’an that appear to support the idea that spiritual beings exist on other planets, but notes that these beings may not practice Islam as it is practiced on Earth. “Islam, like other faiths, has fundamentalist and conservative traditions. All Muslims, however, likely would agree that the prophetically revealed religion of Islam is a set of practices designed only for humans on earth,” Weintraub wrote.

Weintraub found very little in Judaic scriptures or rabbinical writings that bear on the question. The few Talmudic and Kabbalistic commentaries on the subject do assert that space is infinite and contains a potentially infinite number of worlds and that nothing can deny the existence of extraterrestrial life. At the same time, Jews don’t believe the discovery of extraterrestrial intelligence would have much effect on them. He quotes a Jewish anthropologist and scholar who has addressed this issue and concluded that the relationship beween Jews and God would not be affected in the slightest by “the existence of other life forms, newly discovered scientific realities or pan-human behavioral changes.”

Among Christian religions, the Roman Catholics have done the most thinking about the possibility of life on other worlds, the astronomer discovered. In fact, they have had an on-again, off-again theological debate that has gone on for a thousand years. The crux of the matter is original sin. If intelligent aliens are not descended from Adam and Eve, do they suffer from original sin? Do they need to be saved? If they do, then did Christ visit them and was he crucified and resurrected on other planets? “From a Roman Catholic perspective, if sentient extraterrestrials exist some but perhaps not all such species may suffer original sin and will require redemption,” Weintraub summarizes.

The inherent diversity of Protestant denominations, where individuals are encouraged to interpret scripture independently, has led to many conflicting approaches to the question of extraterrestrial intelligence. Weintraub determined that the views of Lutheran theologian Paul Tillich appear to represent a viable consensus. Tillich argued that the need for salvation is universal and the “saving power” of God must be everywhere. At the same time, he maintained that God’s plan for human life need not be the same as his plan for aliens.

Evangelical and fundamental Christians are most likely to have difficulty accepting the discovery of extraterrestrial life, the astronomer’s research indicates. “…most evangelical and fundamentalist Christian leaders argue quite forcefully that the Bible makes clear that extraterrestrial life does not exist. From this perspective, the only living, God-worshipping beings in the entire universe are humans, created by God, who live on Earth.” Southern Baptist evangelist Billy Graham was a prominent exception who stated that he firmly believes “there are intelligent beings like us far away in space who worship God.”

Weintraub also identified two religions – Mormonism and Seventh-day Adventism – whose theology embraces extraterrestrials. In Mormonism, God helps exalt lesser souls so they can achieve immortality and live as gods on other worlds. And, Ellen White, who co-founded Seventh-Day Adventism, wrote that Got had given her a view of other worlds where the people are “noble, majestic and lovely” because they live in strict obedience to God’s commandments.

In answer to the question “Are we ready?” Weintraub concludes, “While some of us claim to be ready, a great many of us probably are not… very few among us have spent much time thinking hard about what actual knowledge about extraterrestrial life, whether viruses or single-celled creatures or bipeds piloting intergalactic spaceships, might mean for our personal beliefs [and] our relationships with the divine.”