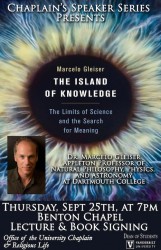 Renowned theoretical physicist Marcelo Gleiser specializes in particle cosmology — studying the emergence of complex structures in nature to try to make sense of the world and our place in the grand scheme of things. He will discuss his latest book, The Island of Knowledge: The Limits of Science and the Search for Meaning, at 7 p.m. Thursday, Sept. 25, at Vanderbilt University’s Benton Chapel.

The event is free and open to the public and is part of the Chaplain’s Speaker Series presented by Vanderbilt’s Office of the University Chaplain and Religious Life. Gleiser’s book will be on sale at the event and a book signing will follow the discussion.

“When I got into science, my goal was ambitious but simple: to devise a theory that could explain ‘everything,’ at least everything about the physical world. I wanted to know The Truth. But alas: Decades spent practicing science taught me a lesson that was both wonderful and humbling: We can’t know everything. We can’t even know what ‘everything’ is or means,” Gleiser said recently in The Washington Post.

His latest book covers a broad swath of subjects – from cognition and curved space to particle physics, superstring theory and multiverses – in a thoughtful, accessible style that balances philosophy with hard science.

Gleiser, Appleton Professor of Natural Philosophy and professor of physics and astronomy at Dartmouth College, has been featured on the Science Channel’s Through the Wormhole series that is hosted by actor Morgan Freeman and explores the deepest mysteries of existence.

He is a Fellow of the American Physical Society and a recipient of the Presidential Faculty Fellows Award from the White House and the National Science Foundation. Gleiser is also very active in the public understanding of science, having authored three books and dozens of essays in magazines and newspapers around the world. He is also the co-founder of and regular contributor to a blog on science and culture hosted by National Public Radio, 13.7.