Most engineering Ph.D. students are taught by engineers who have mainly worked in academia. But most of these engineering Ph.D.s go on to make their careers in industry, not academia, and they are finding gaps of essential knowledge in their education. 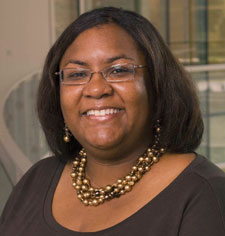 “I hear over and over how important it is to communicate, but we don’t teach that in our programs. You need to be able to communicate your ideas not just to a technical audience, but to a Nobel Prize winner, an entrepreneur, a middle school audience.”

Monica Cox, PhD’05, is out to fill those gaps. The Peabody graduate is one of the top national researchers in the field of engineering education. She’s won a Presidential Early Career Award for Scientists and Engineers, the nation’s highest honor given for young researchers in the early stages of their independent research careers. Cox says that the evaluators for the award  thought her research has the ability to transform education. She’s now putting that research into action as an associate professor of engineering education at Purdue University, where she directs the Pedagogical Evaluation Laboratory. She is the inaugural director of the College of Engineering’s leadership minor, and she’s overseeing a National Science Foundation grant project. She has collaborated on NSF projects totaling more than $10 million since 2005.

Cox conducts qualitative and quantitative research to develop tools that can be used to improve learning. She is also interested in helping increase the number of women and minorities in the STEM (science, technology, engineering, math) fields.

“In my master’s program (in engineering), I didn’t see lots of women and minorities. That caused me to shift my interest toward education—how do we increase access to these STEM careers?” Cox says. “As a woman and a minority, I found myself with few peers and role models in my bachelor’s and master’s programs. I wanted to address that.”

At Peabody, she focused on leadership and policy studies. Now, as the first African American woman to be a tenured engineering professor at Purdue, Cox teaches a course in why policy and leadership are important to engineers. “I developed that course directly from my work at Peabody,” she says.

Cox’s latest outreach focus is on communication. “I hear over and over how important it is to communicate, but we don’t teach that in our programs. How do you pitch your excellent idea if you’ve never done that before?” she says. “You need to be able to communicate your ideas not just to a technical audience, but to a Nobel Prize winner, an entrepreneur, a middle school audience. If you had five minutes with Michelle Obama, how would you communicate with her?”

Cox had that very opportunity when she was a featured panelist at a fall 2011 White House event hosted by the First Lady that focused on how to keep women in research careers. As a member of the National Science Board, Peabody Dean Camilla Benbow was a guest at the event.

“More than half of the people pursuing Ph.D.’s do not complete their degrees,” Cox says. “I want to show others that they can do this too.”