Crime and punishment: the neurobiological roots of modern justice 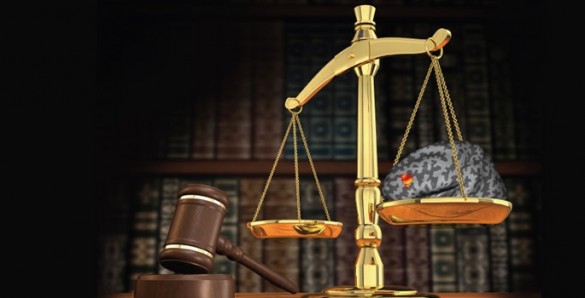 The willingness of people to punish others who lie, cheat, steal or violate other social norms even when they weren’t harmed and don’t stand to benefit personally, is a distinctly human behavior. There is scant evidence that other animals, even other primates, behave in this “I punish you because you harmed him” fashion. Although this behavior – called third-party punishment – has long been institutionalized in human legal systems and economists have identified it as one of the key factors that can explain the exceptional degree of cooperation that exists in human society, it is a new subject for neuroscience.

In a paper published online on April 15 by the journal Nature Neuroscience, a pair of neuroscientists from Vanderbilt and Harvard universities has proposed the first neurobiological model for third-party punishment. It outlines a collection of potential cognitive and brain processes that evolutionary pressures could have re-purposed to make this behavior possible.

“The concepts of survival of the fittest or the selfish gene that the public generally associates with evolution are incomplete,” said René Marois, associate professor of psychology at Vanderbilt, who co-authored the paper with Joshua Buckholtz, assistant professor of psychology at Harvard. “Prosociality – voluntary behavior intended to benefit other people even when they are not kin – does not necessarily confer genetic benefits directly on specific individuals but it creates a stable society that improves the overall survival of the group’s offspring.”

One of the underlying mental abilities that allows humans to establish large-scale cooperation between genetically unrelated individuals is the capability to create, transmit and enforce social norms, widely shared sentiments about what constitutes appropriate behavior. These norms take a variety of forms, ranging from culturally specific standards of behavior (such as “thou shall greet an acquaintance of the opposite sex with a kiss on each cheek”) to universal standards that vary in strength in different cultures (such as “thou shalt not commit adultery”) to universal norms that are so widely held that that they are codified into laws (such as “thou shalt not kill”).

“Scientists have advanced several models to explain the widespread cooperation that is characteristic of human society, but these generally fail to explain the emergence of our large stable societies” said Marois.

One model holds that individuals will perform altruistic actions when they benefit his or her kin and increase the likelihood of transmitting genes that they share to future generations. However, it doesn’t explain why individuals cooperate with people who do not share their genes.

“You scratch my back and I’ll scratch your back” is the essence of another model called reciprocal altruism or direct reciprocity. It argues that when two people interact repeatedly they have a mutual self-interest in cooperating. Although this can explain cooperation among unrelated people, scientists have found that it only works in relatively small groups.

Similarly, theories of indirect reciprocity, which focus on the benefits an individual gains by maintaining a good reputation through altruistic behavior, cannot account for the widespread emergence of cooperation because the benefits that individuals accrue through one-shot altruistic interactions are negligible.

There is one class of models, however, that has been successful in explaining the maintenance of cooperation among genetically unrelated individuals. According to these strong reciprocity models, individuals will reward norm-followers or punish norm-violators even at a cost to themselves (altruistic punishment).

Strong reciprocity models, like the other models mentioned above, have primarily been developed to account for second-party interactions. While second-party interactions may prevail in non-human primate and small human societies, there is evidence that the evolution of our large-scale societies hinged on a different, and more characteristically human form of interaction, namely third-party punishment (“I punish you because you harmed him”).

The codification of social norms into laws and the institutionalization of third-party punishment “is arguably one of the most important developments in human culture,” the paper states.

In the modern criminal justice system, judges and jury members – impartial third-party decision-makers – are tasked to evaluate the severity of a criminal act, the mental state of the accused and the amount of harm done, and then integrate these evaluations with the applicable legal codes and select the most appropriate punishment from available options. Based on recent brain mapping studies, Buckholtz and Marois propose a cascade of brain events that take place to support the cognitive processes involved in third-party punishment decision-making. Specifically, they have localized these processes to five distinct areas in the brain – two in the frontal cortex, which is involved in higher mental functions; the amygdala deep in the brain that is associated with emotional responses; and two areas in the back of the brain that are involved in social evaluation and response selection.

According to Buckholtz and Marois’ model, punishment decisions are preceded by the evaluation of the actions and mental intentions of the criminal defendant in a social evaluation network comprised of the medial prefrontal cortex (MPFC) and the temporo-parietal junction (TPJ).

While it is often assumed that legal decision-making is purely based on rational thinking, research suggests that much of the motivation for punishing is driven by negative emotional responses to the harm. This signal appears to be generated in the amygdala, causing people to factor in their emotional state when making decisions instead of making solely factual judgments.

Next, the decision-maker must integrate his or her evaluation of the norm-violator’s mental state and the amount of harm with the specific set of punishment options. The researchers propose that the medial prefrontal cortex, which is centrally located and has connections to all the other key areas, acts as a hub that brings all this information together and passes it to the dorsolateral prefrontal cortex (DLPFC), where the final decision is made with the input from another rear-brain area called the intraparietal sulcus, involved in selecting the appropriate punishment response. As such, the DLPFC may be at the apex of the neural hierarchy involved in deciding on the appropriate punishments that should be given to specific norm violations.

The current model focuses on the role of punishment in encouraging large-scale human cooperation, but the researchers recognize that reward and positive reinforcement are also powerful psychological forces that encourage both short-term and long-term cooperation.

Marois adds: “It is somewhat ironic that while punishment, or the threat of punishment, is thought to play a foundational role in the evolution of our large-scale societies, much research in developmental psychology demonstrates the immense power of positive reinforcement in shaping a young individual’s behavior.” Understanding how both reward and punishment work should therefore provide fundamental insights into the nature of human cooperative behavior. “The ultimate ‘pot of gold at the end of the rainbow’ here is to promote a criminal justice system that is not only fairer, but also less necessary,” said Marois.

This work is the latest contribution of Vanderbilt researchers to the newly emerging field of neurolaw and was supported by the MacArthur Foundation Research Network on Law and Neuroscience, directed by Owen Jones, New York Alumni Chancellor’s Chair in Law and professor of biological sciences at Vanderbilt.