Political divide: Why health care is the issue on which Americans may never agree

Of all the issues being debated by politicians, lawmakers and voters, health care may be the issue on which no one can agree.

A study by a team of professors at the Vanderbilt Owen Graduate School of Management finds that health care is one of the most divisive issues splitting Democrats and Republicans, especially when it comes to cost and access. Even if the person works in the health care industry, political affiliation still reflects his or her opinions on health care.

Marketing professors Dawn Iacobucci and Steve Hoeffler and professor of health care and economics Lawrence Van Horn conducted two surveys, one at a major health care conference and a second national poll almost a year later to verify the robustness of their original findings. They found the most striking differences in opinion were not impacted by gender or whether or not they worked in the health care industry, but strictly along party lines.

“This research suggests that common ground and metrics will be difficult to find between those holding such diverse ideological positions,” the team writes.

“As politicians maneuver in D.C. and candidates seize on health care reform as a wedge issue, the voters may see ‘politics as usual’; rather it’s a case of ‘politicus extremus,’” said Van Horn.

Is health care a priority?

The first part of the survey sought people’s general opinions on the importance of health care in comparison with other big national issues.

QUESTION: If you had to pay more each year in taxes, how would you allocate $100 to support education, infrastructure (bridges, roads, etc.), military and security and health care? 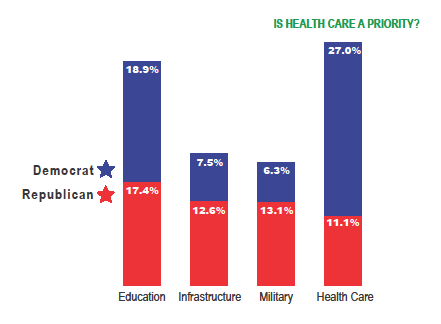 Democrats and Republicans were pretty similar on education and infrastructure dollars, but the greatest difference in opinion was on health care spending.

“Reaching consensus on the efficacy of reform, now and going forward, will be very difficult with parties at such odds,” the team writes.

The second section of the survey asked respondents to focus on health care dollars. 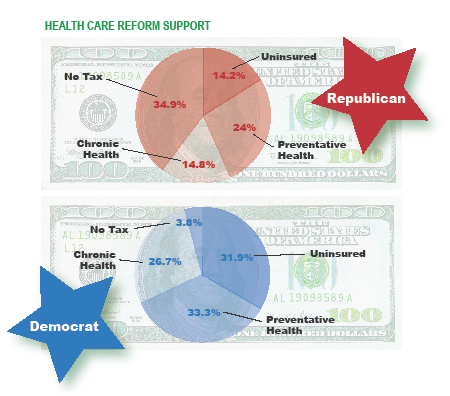 Democrats wanted the most dollars to provide coverage to the uninsured, extend support of preventative health programs and cover chronic health conditions. In sharp contrast, the majority of Republicans polled preferred no increase in tax dollars.

The next section of the survey looked at what trade-offs people would be willing to make in connection with health care. The researchers used a conjoint study—which measures the perceived values of a product or service’s features to see how demand for that product or service is related to price.

QUESTION: Would you support a health care program with: 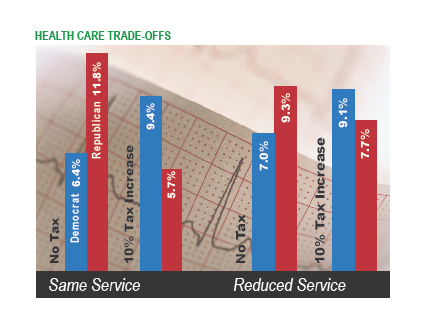 Republicans and Democrats were complete opposites on what they preferred the most and least. The Republicans chose not increasing taxes and cutting services as their most desirable option. It was the Democrats’ least preferred option.

In contrast, the Democrats chose cutting services, coupled with a 10 percent tax increase for the other programs as their top choice. That was the Republicans’ least desirable option.

The Democrats also chose for wealthy retirees to fund their own health care instead of using government services, which is the opposite of what the Republican respondents chose.

The researchers found some differentiation among men and women and those within and outside of the health care field.

Health care employees vs. others