Melanoma patients who are treated with new oral drugs inhibiting the BRAF gene are at increased risk for developing secondary skin cancers. A new study co-authored by Vanderbilt-Ingram Cancer Center investigators and researchers from 12 other cancer centers discovered clues that may explain what is triggering these secondary cancers.

In 2011, the FDA approved the drug vemurafenib for the treatment of metastatic melanoma in patients whose tumors harbor the BRAF 600E mutation. While the drug, known commercially as Zelboraf, has nearly doubled survival among patients who respond to treatment, a significant number of those patients develop secondary skin cancers – most commonly squamous-cell carcinomas and keratoacanthomas.

To determine the cause of these secondary cancers, the investigators performed a molecular analysis of patient lesions.

Most of the patients (78 percent) had clinical signs of chronically sun-damaged skin and 17 percent had a history of squamous-cell carcinomas or keratoacanthomas.

Researchers obtained 21 samples of cutaneous squamous-cell carcinoma or keratoacanthoma from 11 patients with metastatic melanoma, and a validation set of 14 samples from 12 patients who had been treated with vemurafenib.

The investigators found that about 60 percent of the tumor specimens harbored mutations in the RAS gene, the most prevalent being HRAS Q61L.

The researchers then used a mouse model to induce HRAS Q61L-mediated skin cancers and found that while vemurafenib did not initiate or promote cancer development, it accelerated growth of existing lesions that harbored HRAS mutations.

Growth of these tumors was blocked when a drug that inhibits the MEK molecular pathway was used.

“This is a prime example of bedside-to-bench research where observations by oncologists can be rapidly studied and elucidated by close collaboration with dermatologists and basic scientists,” said Puzanov.

“This will inform further clinical development of next-in-line BRAF inhibitors, as well as BRAF-targeted drug combinations.”

The authors note that studies in mice suggest these secondary tumors develop from a multi-step process driven by exposure to a chemical carcinogen or ultraviolet light, followed by a tumor-promoting event. This event is an oncogenic driver mutation in RAS, preferentially in HRAS.

“Our study suggests that combining the BRAF inhibitor vemurafenib with a MEK inhibitor drug may be useful in patients who harbor the RAS mutation,” said Puzanov.

Melanoma patients who are being treated with vemurafenib are now monitored closely for the potential development of these secondary skin cancers, which tend to appear soon after treatment begins.

The secondary cancers can be safely removed surgically and patients do not have to stop vemurafenib therapy for their metastatic melanoma. 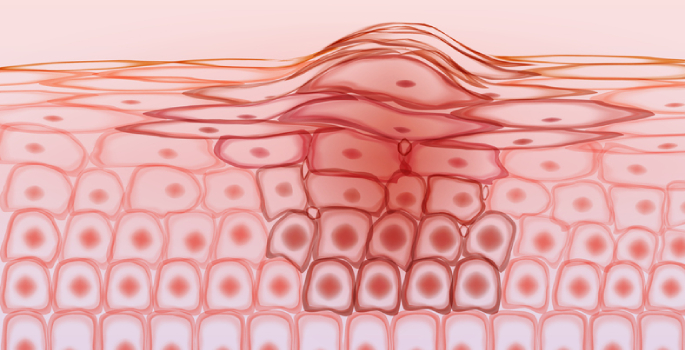