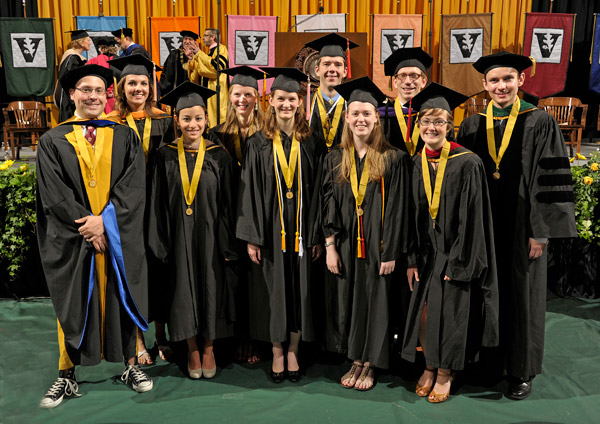 Top scholars from Vanderbilt University’s undergraduate and professional schools are being honored with Founder’s Medals during Commencement on Friday, May 13.

Since 1877, a gold medal has been awarded to the student graduating at the top of his or her class from each of Vanderbilt’s schools. These gold medals are called “Founder’s Medals” in honor of Cornelius Vanderbilt who made a specific contribution to endow the awards in their first year.

Lillian Johnson, Murfreesboro, Tenn., Founder’s Medalist for the Blair School of Music, is graduating with a bachelor of music in violin performance and a minor in chemistry. She is a recipient of the Harold Stirling Vanderbilt Honor Scholarship, the Williams Award for the best paper written in a Blair School class and the Theodore Presser Award, the highest honor awarded at the Blair School for both musical and academic excellence.

Johnson was on the Dean’s List every semester and was inducted to the National Music Honor Society, Pi Kappa Lambda, during her junior year. She also participated in chemistry research for seven semesters, with a special interest in boron clusters and liquid crystals. She spent a summer living and working in the Czech Republic at the Institute for Inorganic Chemistry near Prague, and she has volunteered as a music teacher at Nashville’s W.O. Smith Community School.

This summer she will begin the Medical Scientist Training Program at Vanderbilt’s School of Medicine, working to earn both medical and doctoral degrees with a goal of changing lives through biomedical research.

She was awarded a fellowship from the Vanderbilt Undergraduate Summer Research Program and has presented at the annual conference of the American Society of Parasitologists. She was the four-year recipient of the Robert Harvey Honor Scholarship. She is in the honors program for Molecular and Cellular Biology and she will turn her findings from the past three years into a senior thesis. She plans to publish her research and is writing a manuscript on which she is the first author.

Outside the lab, she participated in the Vanderbilt-in-Spain program in Madrid and has used her language skills to chat with Spanish-speaking patients while volunteering in Vanderbilt University Medical Center’s emergency department, and as a student medical interpreter at the Matthew Walker Comprehensive Health Center in Nashville.

After graduation, she will attend medical school with an ultimate goal of working in academic medicine. She has been accepted to nine doctor of medicine programs.

Elizabeth Coyle, Franklin, Tenn., Founder’s Medalist for the Divinity School, is graduating with a master of theological studies degree with a focus on ethics and society. She is a recipient of the Dougherty Scholarship and a fellow in the Cal Turner Program for Moral Leadership in the Professions. She holds a bachelor‘s degree from Xavier University.

Coyle has participated in a number of campus and community activities, including Marginalia: To the Least of These, a student organization that works with the homeless; Transition, a student group dedicated to vocational discernment and ministry in the world, and the Society of Saint Cornelius, an organization for Catholic students at Vanderbilt. She has also volunteered for the Room in the Inn program with the Campus for Human Development Homeless Outreach Center. Particularly meaningful for Coyle was an opportunity to work with other Vanderbilt students to develop an initiative for Nashville’s OASIS Center to introduce the practices of community gardening and nutrition education.

Coyle plans after graduation are to become a campus minister and to continue working as an advocate for the homeless by developing initiatives through which young people can serve and learn from the experiences of the homeless.

He has participated in several campus and community service efforts including Sigma Nu fraternity and Manna Project International, which helps communities in need and has projects in Nicaragua, Ecuador and Guatemala. For his engineering senior design project, Rixey traveled to rural Guatemala to help design a bike generator system that would provide power for the people there.

He will work as an associate consultant for Bain & Company in Dallas following graduation and plans to later attend graduate business school.

Joshua Buckholtz, Potomac, Md., Founder’s Medalist for the Graduate School, is graduating with a doctor of philosophy degree in neuroscience. His research focused on the underlying mechanisms of substance abuse, addiction and psychopathic behavior. He has published 16 articles and two book chapters and holds a bachelor’s degree from the University of Wisconsin.

He leaves Vanderbilt to become an assistant professor of psychology at Harvard University in the Faculty of Arts and Sciences.

David Barnes, Kingsport, Tenn., Founder’s Medalist for the Law School, is graduating with a doctor of jurisprudence. He is the recipient of the Robert F. Jackson Memorial Prize, which is awarded to a member of the second-year law class who has maintained the highest scholastic average during the two years, and the Top Litigator Award. He also participated in Vanderbilt Law Review and won the Morgan Prize, a cash award given to the student contributing the most outstanding piece of student writing published in the law review during the school year. He holds a bachelor’s degree from the University of the South.

Outside the classroom, Barnes served as president of the Law and Business Society and was also an active member of the Environmental Law Society..

Following commencement, he will enter a clerkship with Judge Karen LeCraft Henderson of the U.S. Court of Appeals for the District of Columbia Circuit in Washington, D.C. After his clerkship, he will join King & Spalding in Atlanta, Ga., as an associate.

Piotr Pilarski, Northbrook, Ill., Founder’s Medalist for the School of Medicine, is graduating with a doctor of medicine degree. He is a member of the Alpha Omega Alpha Honor Medical Society and was elected four consecutive years to the Student Curriculum Committee, the official body through which medical students can provide feedback to course instructors, voice opinions about their medical education and effect changes to the medical school’s curriculum. Pilarski served as co-chair of the committee his senior year. He holds a bachelor’s degree from Harvard University.

Pilarski co-founded and served as president of the Vanderbilt Healthcare Improvement Group, an organization dedicated to bringing students from Vanderbilt’s Owen Graduate School of Management, School of Medicine, School of Nursing and Peabody School of education and human development together to improve the quality of healthcare at Vanderbilt University Medical Center and other Nashville clinics and hospitals.

Born in Poznan, Poland, Pilarksi immigrated to the United States with his mother, father and brother. His grandfather, Marian, will travel from Poland to see him receive his diploma. He is the first in his family to receive a medical degree.

Following graduation, Pilarski will stay at Vanderbilt to complete his residency in internal medicine.

Morgan Stone, Martin, Tenn., Founder’s Medalist for the School of Nursing, participates in Vanderbilt’s commencement ceremony as the recipient of a Master of Science in Nursing with a family nurse practitioner specialty. Stone received her degree from Vanderbilt in August 2010. While at the university, she was a member of the Sigma Theta Tau International Honor Society of Nursing and named Outstanding Student in the Family Nurse Practitioner Program. She holds a bachelor’s degree from the University of Tennessee, Martin, and was previously a registered nurse in the Chest Pain Unit at Nashville’s Saint Thomas Hospital.

Stone is currently employed as a board-certified family nurse practitioner at the Martin Specialty Clinic in Martin, Tenn. She is active in her community providing free health screenings and shots to local residents. She also learned basic medical Spanish in order to participate in a medical/dental mission trip in the Honduras.

She plans to continue her work as a family nurse practitioner to help bring health care to an underserved population.

Alison Crawford, Paducah, Ky., Founder’s Medalist for the Owen Graduate School of Management, is graduating with a Master of Business Administration with areas of emphasis in finance and accounting.  She entered Owen in fall 2009 as a joint BA/MBA student. She earned a bachelor of arts from Vanderbilt in May 2010.

While at Owen, Crawford received the Financial Executives International Award and the Bruce D. Henderson Prize for Academic Excellence, and was recently inducted into the Beta Gamma Sigma Honor Society. She was also involved in several organizations, including the Finance Club, Women’s Business Association, the Latin Business Association and Project Pyramid, an effort to help those at the bottom of the socio-economic pyramid.

After receiving her MBA, Crawford will begin work at Ford Motor Company in the company’s Finance Rotational Program.

Rebecca Barden, Nashville, Founder’s Medalist for the Peabody College of education and human development, is graduating with a bachelor of science in human and organizational development.  While at Vanderbilt, she made the Dean’s List and completed an internship in the special events department at Christie’s in New York City through Peabody’s Human Organization and Development Internship Program.

She is also active in Chi Omega sorority and The Make-A-Wish Foundation of Middle Tennessee.