Glaucoma – a leading cause of vision loss and blindness worldwide – runs in families. A team of investigators from Vanderbilt University and the University of Florida has identified a new candidate gene for the most common form of the eye disorder, primary open angle glaucoma (POAG).

The findings, reported Feb. 17 in the open-access journal PLoS Genetics, offer novel insights into glaucoma pathology and could lead to targeted treatment strategies.

Elevated pressure inside the eye is a strong risk factor for POAG. Pressure increases because of increased resistance to the flow of aqueous humor out of the eye’s front chamber (between the cornea and iris). Current treatments for POAG attempt to reduce intraocular pressure by reducing aqueous humor production or by surgically providing a clear “drain.”

“It has been known for decades that the reason the pressure goes up in POAG is because the outflow pathway for aqueous humor is not working,” said Rachel Kuchtey, assistant professor of Ophthalmology and Visual Sciences and principal investigator of the current studies.

“It seems kind of simple – there’s a decrease in the rate of aqueous humor flowing out of the eye,” said John Kuchtey, research instructor in ophthalmology and visual sciences and first author of the paper. “But the basic mechanisms of aqueous humor outflow at the cellular and molecular level – and how they are disrupted in glaucoma – are not understood. It’s a long-standing puzzle in ophthalmology.”

So far, three genes have been associated with human glaucoma, but they account for only a small fraction of cases and have not shed much light on the disease process. The Vanderbilt investigators turned to a model with simpler genetics – a canine model of the disease.

Forty years ago, Kirk Gelatt, from the University of Florida College of Veterinary Medicine, came across a litter of beagles that had a high incidence of glaucoma. The finding suggested to Gelatt that the disease was inherited, and he established a colony of POAG-affected beagles to study treatments for the disease.

In affected beagles, intraocular pressure begins to increase at 8 to 16 months of age, due to increased resistance to aqueous humor outflow. The clinical course of the disease “absolutely resembles human glaucoma,” Rachel Kuchtey said.

The beagles are the only naturally occurring animal model for human POAG.

The Vanderbilt investigators used blood samples to search for genes associated with POAG. They first narrowed in on a certain spot (locus) on canine chromosome 20, which matched part of human chromosome 19.

Previous studies had associated the human region with intraocular pressure, a good sign that they were on the right track, John Kuchtey said.

Sequencing of the entire canine locus – more than 4 million “letters” of DNA – revealed that a gene called ADAMTS10 was the strongest disease-associated candidate. POAG-affected dogs have a single mutation in the gene, which encodes a protein involved in processing the extracellular matrix (ECM), the connective and structural support tissue around cells.

“There is a lot of evidence that proteoglycans (molecules in the ECM) and matrix remodeling might have something to do with aqueous outflow resistance, and so this gene supports that line of investigation,” John Kuchtey said.

The researchers also demonstrated that the gene is highly expressed in the trabecular meshwork – the specialized filtration tissue through which aqueous humor passes, another supportive piece of evidence that it may have a role in regulating aqueous humor outflow.

The investigators are currently exploring ADAMTS10’s normal biological functions, and they have studies in progress to examine whether the human ADAMTS10 gene is mutated in human glaucoma. They are hopeful that understanding this gene will open therapeutic possibilities for glaucoma.

“Right now we know that aqueous outflow is impaired in POAG, but we have no way to fix it because we don’t understand how that normally works and what the pathology is in POAG,” Rachel Kuchtey said.

“If this gene truly plays a role in aqueous outflow regulation, we can begin to look at it – or its molecular partners – as targets for treatments.”

Gene therapy to rescue a defect might also be a possibility. Gene therapy for an inherited form of childhood blindness was first validated in dogs and is now in trial in humans. 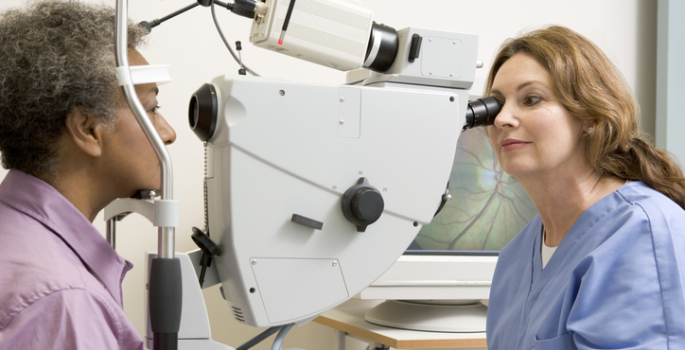