(Note: A multimedia version of this story is available on Exploration, Vanderbilt University’s online research magazine, at http://www.vanderbilt.edu/exploration/stories/bionicarm.html)

Combine a mechanical arm with a miniature rocket motor: The result is a prosthetic device that is the closest thing yet to a bionic arm.

A prototype of this radical design has been successfully developed and tested by a team of mechanical engineers at Vanderbilt University as part of a $30 million federal program to develop advanced prosthetic devices.

“Our design does not have superhuman strength or capability, but it is closer in terms of function and power to a human arm than any previous prosthetic device that is self-powered and weighs about the same as a natural arm,” says Michael Goldfarb, the professor of mechanical engineering who is leading the effort.

The prototype can lift (curl) about 20 to 25 pounds – three to four times more than current commercial arms – and can do so three to four times faster. “That means it has about 10 times as much power as other arms despite the fact that the design hasn’t been optimized yet for strength or power,” he says.

The mechanical arm also functions more naturally than previous models. Conventional prosthetic arms have only two joints, the elbow and claw. By comparison, the prototype’s wrist twists and bends and its fingers and thumb open and close independently.

The Vanderbilt arm is the most unconventional of three prosthetic arms under development by the Defense Advanced Research Project Agency (DARPA) program. The other two are being designed by researchers at the Advanced Physics Laboratory at Johns Hopkins University in Baltimore who head the program. Those arms are powered by batteries and electric motors. At the same time, the program is supporting teams of neuroscientists at the University of Utah, California Institute of Technology and the Rehabilitation Institute of Chicago who are developing advanced methods for controlling the arms by connecting them to nerves in the users’ bodies or brains.

“Battery power has been adequate for the current generation of prosthetic arms because their functionality is so limited that people don’t use them much,” Goldfarb says. “The more functional the prosthesis, the more the person will use it and the more energy it will consume.”

At a certain point, the weight of the batteries required to provide the energy to operate the arm for a reasonable period becomes a problem. It was the poor power-to-weight ratio of the batteries that drove Goldfarb to look for alternatives in 2000 while he was working on a previous exoskeleton project for DARPA. He decided to miniaturize the monopropellant rocket motor system that is used by the space shuttle for maneuvering in orbit. His adaptation impressed the Johns Hopkins researchers, so they offered him $2.7 million in research funding to apply this approach to the development of a prosthetic arm.

Goldfarb’s power source is about the size of a pencil and contains a special catalyst that causes hydrogen peroxide to burn. When hydrogen peroxide burns, it produces pure steam. The steam is used to open and close a series of valves. The valves are connected to the spring-loaded joints by belts made of a special monofilament used in appliance handles and aircraft parts. A small sealed canister of hydrogen peroxide that easily fits in the upper arm can provide enough energy to power the device for 18 hours of normal activity.

One of the researchers’ concerns was protecting the wearer and others in close proximity from the heat generated by the device. By covering the hottest parts with special insulating plastic, they were able to reduce surface temperatures enough so they are safe to touch. The steam exhaust was also a problem, which they decided to handle in as natural a fashion as possible: by venting it through a porous cover, where it evaporates like natural perspiration. “The amount of water involved is about the same as a person would normally sweat from their arm in a warm day,” Goldfarb says.

The Vanderbilt team built a first prototype that ran on condensed gas. This allowed them to test the basic design and address the basic problems of control, leakage and noise. After getting it to work properly on “cold gas,” the engineers created a second prototype with the hydrogen peroxide power source, which produces steam at 450 degrees Fahrenheit. They quickly determined that the material they had used for the belts couldn’t take the heat. After an extended process of trial and error before they found a commercial material that was strong enough and could withstand the high temperatures. After solving this and a number of other smaller problems, the researchers got the second prototype working properly by the end of June.

In the fall, DARPA’s “Revolutionizing Prosthetics 2009” program will move to its second stage. Even though his team has met all its research milestones and produced a working prototype, Goldfarb is not certain that their arm will be included. “DARPA set a goal of developing a commercially available arm in two years. Because of our novel power source, the process of proving that our design is safe and getting regulatory approval for its use will probably take longer than that,” he says.

If DARPA decides it cannot continue supporting the arm’s development for this reason, Goldfarb is confident that he can get alternative funding. “We have made so much progress and gotten such positive feedback from the research community that I’m certain we’ll be able to keep going,” he says.

Vanderbilt University is a private research university of approximately 6,300 undergraduates and 4,600 graduate and professional students. Founded in 1873, the University comprises 10 schools, a public policy institute, a distinguished medical center and The Freedom Forum First Amendment Center. Vanderbilt, ranked as one of the nation’s top universities, offers undergraduate programs in the liberal arts and sciences, engineering, music, education and human development, and a full range of graduate and professional degrees. 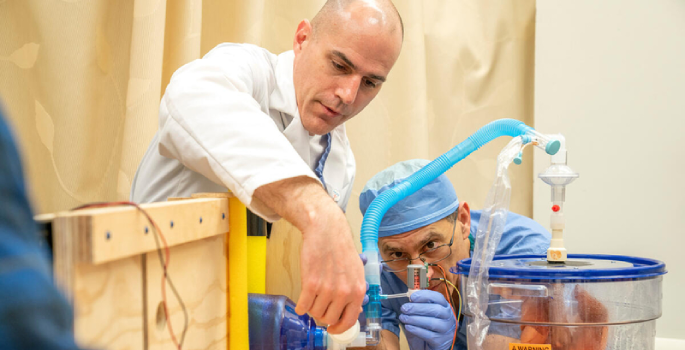