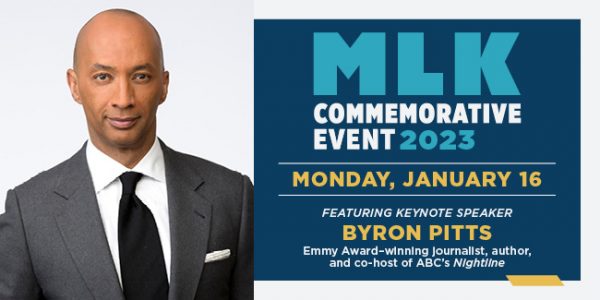 Emmy Award–winning journalist and author Byron Pitts, co-host of ABC’s Nightline, will be the keynote speaker for Vanderbilt University’s 2023 Martin Luther King Jr. Day commemorative event. This year’s topic is “It Starts with Me: Cultivating a Beloved Community Mindset to Transform Unjust Systems.”

The event is scheduled from 6:30 to 8 p.m. CT on Monday, Jan. 16, at Blair School of Music’s Ingram Hall and is open to the Vanderbilt community. The event also will be livestreamed.

Register here to attend the event in person >>

Pitts is known for covering high-profile international news stories over the span of a decades-long career, including investigations related to this year’s MLK theme of transforming unjust systems. He became one of CBS News’ lead reporters during the Sept. 11, 2001, terrorist attacks and won an Emmy Award for his breaking news coverage. As a war correspondent embedded with U.S. troops, he covered the Iraq War, including coverage of the fall of the Saddam Hussein statue in 2003. In the early 2000s, he also reported from the front lines of Hurricane Katrina, the war in Afghanistan, the military buildup in Kuwait, the Elián González case, the 2000 Florida presidential vote recount and the refugee crisis in Kosovo.

He earned a national Emmy Award for news coverage of a Chicago train wreck in 1999. He was recognized for his work by the National Association of Black Journalists in 2002, and he has received numerous Associated Press awards and six regional Emmy Awards.

Pitts is the author of Step Out on Nothing: How Faith and Family Helped Me Conquer Life’s Challenges, which chronicles his life from struggling with illiteracy in childhood to becoming a top news anchor.

The Jan. 16 event is just one of the events to honor Martin Luther King Jr. across campus and in collaboration with Nashville community partners.

The annual MLK Joint Day of Service brings together hundreds of student volunteers from Nashville-area colleges and universities to continue the dream of Dr. Martin Luther King Jr. through service. This year’s event will be on Saturday, Jan. 14, beginning at 11 a.m. at Meharry Medical College, 1005 Dr. D.B. Todd Jr. Blvd. in Nashville. After the opening program, volunteers will go to various service sites. Lunch will be provided. RSVP to the event here.

Buses depart from E. Bronson Ingram College (in the parking lot along West End Avenue) and The Commons Center at 8:15 a.m.

Students, faculty and staff are encouraged to take part in the 2023 Nashville MLK Day March and Convocation. Breakfast and transportation will be available from E. Bronson Ingram College and The Commons Center. Vanderbilt community members will march together with community attendees from the Jefferson Street Missionary Baptist Church to the TSU Gentry Center, where this year’s convocation speaker will be Michael Eric Dyson. Sign up for this event and MLK Day hoodies.

Save a life this MLK Day by participating in Hillel’s annual MLK Day blood drive at the Schulman Center from noon to 6 p.m. Walk-ins will be accommodated, but pre-registrants are preferred. Register for the drive here.

The university designated Martin Luther King Jr. Day as a paid staff holiday in 2021 to further align with the university’s increased efforts to strengthen equity, diversity and inclusion across the university community.