Panel discussion to focus on women of color and civic engagement Sept. 18

As Vanderbilt continues to recognize the 100th anniversary of the passage of the 19th Amendment, Vanderbilt’s Office of Community Relations (in the Division of Government and Community Relations) is partnering with the Peabody College Office of Equity, Diversity and Inclusion to sponsor a discussion on the historical fight for Black women’s suffrage by Ida B. Wells and Frankie Pierce.

The event, “The Legacy of Ida and Frankie: Women of Color and Civic Engagement,” will be held via Zoom on Friday, Sept. 18, from 3 to 4:30 p.m. Please register in advance here. >>

The panel will include:

The panelists also will discuss how the legacy of Wells and Pierce informs civic engagement by women of color today.

“The 100th anniversary of the passage of the 19th Amendment is to be celebrated, but we must also realize that there were many voices marginalized during that time and now,” said Midori Lockett, chief community impact officer. “Recognizing this milestone anniversary, I want to be a part of bringing these voices and their progeny to the forefront.”

The Sept. 18 discussion is part of “Vanderbilt, Let’s Vote,” a university-wide effort to encourage voter registration and participation in elections. 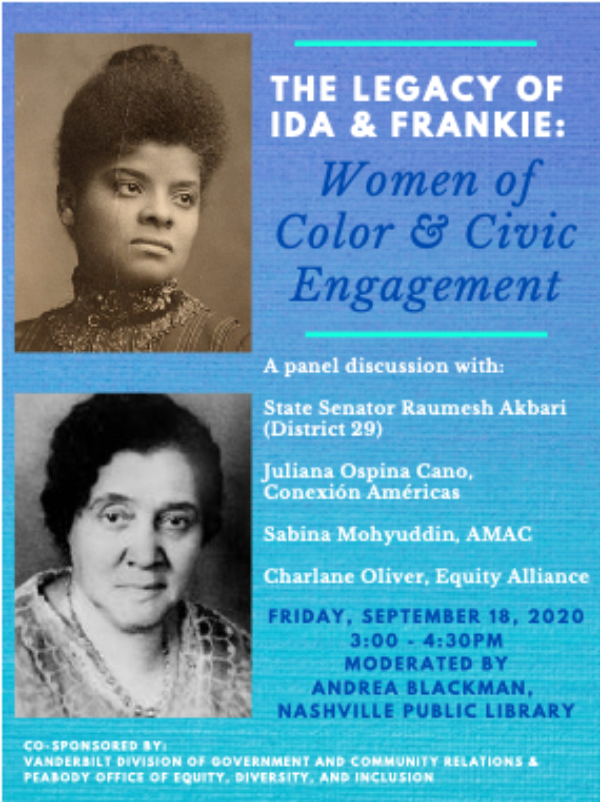