New research explains why some molecules have irregular forms

There’s always a reason for the way molecules form and how they are shaped. Once researchers understand the bonds in molecules, they figure out ways to use the materials they form to the best advantage, unlocking new innovations for science and technology.

But there’s one bond that had scientists stumped – the bond between some types of metals and carbon. Professor of Chemistry Timothy Hanusa and Ph.D. student Ross Koby set out to replicate this unique type of bond using modeling technology. 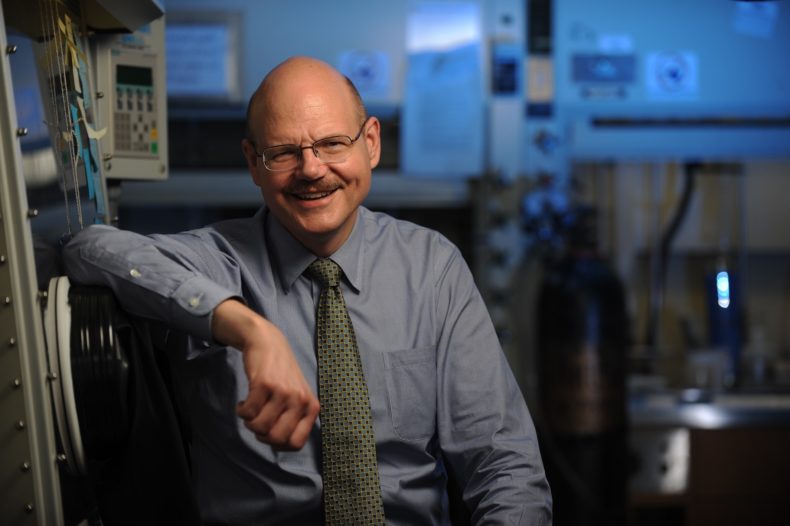 “If we could get the molecular models to form the same shape as the molecules do in real life, we would be able to understand why the bonds form in such irregular shapes,” Hanusa said.

By changing the modeling calculations and incorporating additional data, the team found new factors accounting for the formation, challenging existing theories. They recently outlined their finding for the website Science Trends.

The metal and carbon bonds in question occur in compounds that look like Oreo cookies: in the middle is the metal, and it’s surrounded on either side by rings of carbon. Just like with an Oreo cookie, the rings are generally parallel and balanced, keeping the negatively charged rings as far away from each other as possible. But in some of these compounds, particularly with rare earth metals like samarium or heavier metals like calcium and strontium, the rings slope toward each other, bending so they almost touch at one side.

In the case of the rare earth metals, this can be explained by covalent bonding—the two sides of the molecule are sharing electrons back and forth, in a pattern like a figure-8 that’s been folded over at the center.

But for the heavier metals with a more ionic bond, where atoms attract like two sides of a magnet, the negatively charged sides should repel each other.

Scientists previously accounted for this with something called the dispersion interaction phenomenon, which means that even atoms that repel in close proximity are actually attracted to each other at longer distances. It’s a weak interaction that’s not always accounted for in modeling technology very well.

Hanusa and Koby tested this theory by making some big changes in modeling calculations. First, they used more complete descriptions of the electrons at the metal centers of the molecules (the cream filling in the cookie) to see if they could be affecting the bond or causing the bend.

Next, they used a new calculation that is totally dispersion-free. Whereas old models may or may not have included the effect of dispersion, the new model absolutely nullifies the effect. That way, researchers can run the models with no dispersion, and then turn it back on to see how the model changes.

What they found with the new model confirmed the theory about rare earth metal/carbon bonds being on the more covalent end of the spectrum. These molecules were naturally bent even when the dispersion effect was turned off.

The heavy metal/carbon molecules however, showed something new. The molecular models bent even without the dispersion effect—not as much as in real life, but enough to show that the electrons of the center metal were causing some bending. When the dispersion effect was also turned on, the molecular models bent just like the real molecules do. That means that both dispersion and covalent effects are causing this molecule to bend.

The new calculations show how dispersion and covalent effects can work together to change the structure of molecules. This has significant implications in many areas of chemistry, from determining the boiling points of liquids to affecting protein folding. Thanks to this new research, scientists can now describe molecules more accurately and understand why they behave and react in certain ways.