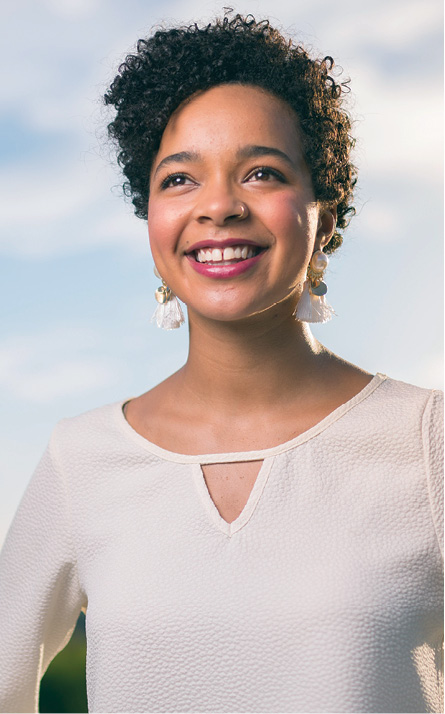 Ariana Fowler, BS’17, was not your typical child. “I read Forbes when I was a kid, which was weird,” she says with a laugh, quickly adding: “I hated recess, too.” But most important, she knew from a very early age that she wanted to help people.

As a young girl, she recalls seeing homeless people around Dallas when driving with her mother. So the business-minded Fowler came up with a plan: “I thought I’d get really rich and buy empty skyscrapers,” she says. “I made this prototype of the skyscrapers, with each floor providing some sort of homeless solution.”

Through the years Fowler’s desire to help others intensified, and she hoped a college education would give her new skills to realize her passion. She applied early decision to Vanderbilt in part because of Opportunity Vanderbilt, the university’s initiative to replace all need-based undergraduate student loans with grants and scholarships.

“I was raised by a single parent,” says Fowler, who majored in human and organizational development at Peabody College. “My family didn’t have a lot of money. So when we got Vanderbilt’s acceptance letter, my mom broke down.”

Fowler graduated from Vanderbilt in May after having received the Allison A. Poarch Scholarship for four years. During her time on campus, she put that investment to good use, giving back to her community as much as she had received. Among her many activities, she co-chaired the Vanderbilt Speakers Committee, served as a residential adviser and mentor to first-year students, and represented her sorority on the Panhellenic Diversity and Inclusivity Task Force. During her senior year she served as president of the Vanderbilt Student Government.

Today she understands the full value of her scholarship more than she or her mother could have the day she received news of her acceptance. “Opportunity Vanderbilt has changed my life,” Fowler says. “I can’t imagine where I’d be without it. I owe all the experiences I’ve had at Vanderbilt to it.”