On March 27, Tennessee state Sen. Ken Yager, R-Kingston, presided over the official presentation of a General Assembly resolution commending physicists from Vanderbilt University, Oak Ridge National Laboratory and the University of Tennessee-Knoxville for their role in the discovery of the new superheavy element 117 and naming it tennessine.

Sen. Ferrell Haile, R-Gallatin, introduced Landon C. Garland Distinguished Professor of Physics Joseph H. Hamilton, who represented the Vanderbilt team. In his remarks, Haile pointed out that tennessine is now the second heaviest element known, that its discovery completes the seventh row in the periodic table, and that Tennessee is only the second state to have an element named on its behalf.

Hamilton, who was invited to speak, praised the role of the late Sen. Douglas Henry for his appreciation of the importance of scientific research and his long-term support for the collaboration between Vanderbilt University and ORNL, which facilitated the international research effort that led to the discovery of the new element. He also reported that the governor’s office had informed him that copies of the updated periodic table, which includes tennessine, had been printed and were being distributed to all the schools in the state.

The joint resolution of commendation, which was authored by Lt. Gov. Randy McNally, R-Oak Ridge, and approved on Feb. 7, begins:

WHEREAS, it is fitting that the members of this General Assembly should pause to recognize those estimable individuals whose efforts have contributed to significant scientific breakthroughs; and

WHEREAS, the recently discovered element 117 has been officially named “tennessine” in recognition of Tennessee’s contributions to its discovery through the efforts of the Department of Energy’s Oak Ridge National Laboratory (ORNL), Vanderbilt University (VU) and the University of Tennessee – Knoxville (UTK); and ….

BE IT RESOLVED BY THE SENATE OF THE ONE HUNDRED TENTH GENERAL ASSEMBLY OF THE STATE OF TENNESSEE, THE HOUSE OF REPRESENTATIVES CONCURRING, that we hereby honor and commend those renowned scientists at Oak Ridge National Laboratory, Vanderbilt University, and the University of Tennessee – Knoxville for their meritorious efforts that led to the discovery of tennessine. Through their extraordinary achievements, they have advanced human knowledge and left an indelible mark on the history of science. 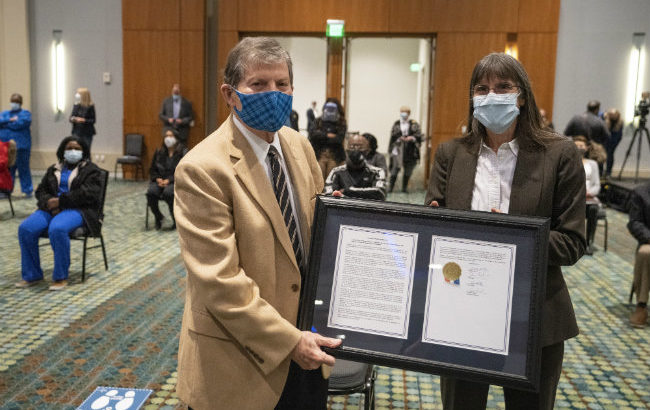