Vanderbilt’s 2015-16 Humphrey Fellows had a chance meeting with Nashville lawmakers while out for a scheduled tour of Nashville’s Oasis Center Nov. 11.

Peabody’s seventh cohort of the Hubert H. Humphrey Fellowship Program are principals, school superintendents, government education officials and nonprofit managers from around the world who were selected for a 10-month professional and cultural exchange at Vanderbilt’s Peabody College of education and human development. They hail from eight countries: China, Cote d’Ivoire, Iran, Myanmar, Nigeria, Pakistan, Papua New Guinea and Uruguay. 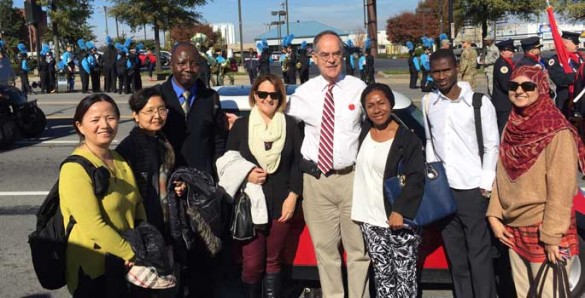 During their time at Peabody, the fellows will collaborate with Vanderbilt and Peabody faculty, attend lectures and symposia, participate in community service projects, share their cultural heritage at area schools and interact with diverse education and government leaders.

As part of a professional and leadership development course taught by program director Nancy Dickson, the fellows visited the Oasis Center, a Nashville organization that provides community-based care for youth struggling with substance abuse. Oasis president and CEO Tom Ward gave them a tour of the facilities, including the art studio, bike workshop and administrative offices.

“I was really impressed by their bike workshop. It seems like a small thing, but the shop, and all of their programs, focus on how to create a better condition for youth growing up,” said Humphrey Fellow Xiaolin Li, who is from China. “They don’t judge them but listen to them. It was powerful.”

Upon leaving Oasis, the group was met by the sounds of marching bands, and received the unexpected bonus of seeing Nashville’s Veterans Day parade. The fellows, many of whom are visiting the United States for the first time, enjoyed the festivities, which included meeting and snapping photos with U.S. Congressman Jim Cooper and Nashville Mayor Megan Barry.

“I think Mayor Barry has a very good leadership personality,” observed Fellow Olto Thomas, who is from Papua New Guinea. “Although she might not really understand what the Humphrey program is, she welcomed and greeted us, and was willing to take pictures with us. She was very approachable.”

Wellington Oboh of Nigeria summarized the parade this way: “Seeing the parade made me feel the impact America has had on the world, and the weight of the sacrifices made for the weak in hopes of true freedom.”

Later the fellows hosted a pre-Thanksgiving potluck for their campus advisers, Friendship Families, AmbassaDores and other faculty, staff and students who contribute to the fellows’ Vanderbilt experience.