Nine Tennessee-based congressional staff members representing eight offices visited Vanderbilt June 25 to get a firsthand look at the breadth of services the university offers to the congressional members’ constituents, regardless of where they live in the state.

“We know that it’s critically important to host congressional staff on campus so that they can see up close the facilities and services we provide to their constituents and so that they can talk with leaders on campus who provide those services. These staff members are often the first point of contact for the constituents of their members of Congress,” said Christina West, assistant vice chancellor for federal relations. “This visit, the first such that we’ve hosted specifically for congressional staff based in Tennessee, was a great opportunity for the staff to gain a better understanding of the university and medical center.”

At the medical center, the visitors were introduced to members of Vanderbilt LifeFlight crews and learned how the nonprofit emergency air medical service touches communities from Chattanooga to Jackson with state-of-the-art technology and highly experienced flight nurses trained in all clinical areas of care including – but not limited to – burn, emergency obstetrics and pediatric ICU.

They also toured the Monroe Carell Jr. Children’s Hospital at Vanderbilt, the Vanderbilt Bill Wilkerson Center, the Mama Lere Hearing School, the Pi Beta Phi Rehabilitation Institute and the Vanderbilt-Ingram Cancer Center. These visits included discussion of some of the unique clinical services Vanderbilt provides to the Midsouth region, as well as some highlights of the cutting-edge research and world-class education that takes place at Vanderbilt.

The congressional staff members even did a bit of community outreach. While visiting the Office of Patient and Community Education at VICC, Rep. Stephen Fincher’s deputy chief of staff encountered a constituent who is also a VICC patient.

The day was rounded out by visits to the Vanderbilt Kennedy Center as well as the Office of Undergraduate Admissions and Office of Financial Aid, both of which further demonstrated that Vanderbilt’s reach extends well beyond its Nashville footprint.

At the Kennedy Center, the visitors learned of the many resources provided by the Tennessee Disability Pathfinder and the Treatment and Research Institute for Autism Spectrum Disorder to individuals with disabilities and their families across Tennessee. Admissions highlighted the fact that Tennessee remains the No. 1 state from which Vanderbilt enrolls, thanks largely to the extensive outreach efforts by undergraduate admissions officers and the generous financial aid packages made available through both Opportunity Vanderbilt and the Tennessee Lottery Scholarship.

“While the day was full of information, this will not be our final interaction with Tennessee-based congressional staff,” West said. “The Office of Federal Relations will continue to work closely with both Tennessee and Washington, D.C.-based staff.” 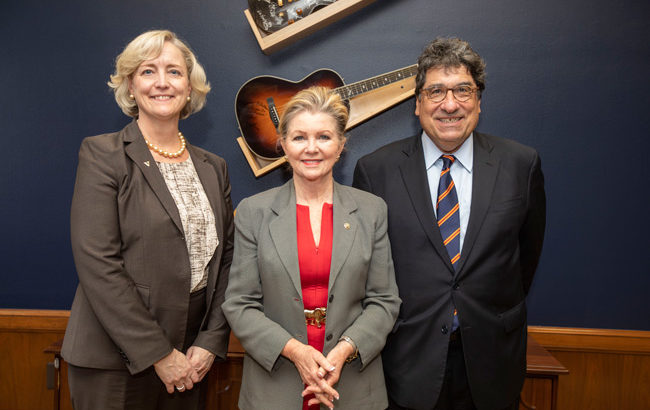