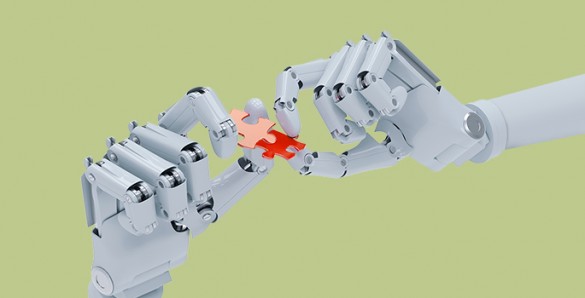 Last year, the White House launched its “SmartAmerica” challenge. The basic idea was to identify research projects that illustrate how the increasing integration of computers with physical systems – sometimes called the ‘internet of things’ – can improve US competitiveness by creating new jobs and business opportunities that in turn will boost economic growth and improve everyone’s quality of life.

On Wednesday, 24 of these projects were featured in the SmartAmerica Challenge EXPO held in Washington, D.C. and two Vanderbilt engineers – Gabor Karsai and Pietro Valdastri – participated.

Karsai, professor of electrical engineering and computer science, heads an Institute of Software Integrated Systems team that is collaborating with engineers at the University of California, Berkeley on developing methods for detecting and preventing cyber-attacks on “Smart Roads,” which manage traffic flow by controlling the cycling of traffic lights.

Valdastri, assistant professor of mechanical engineering, is designing a small medical capsule that can be inserted in patients when they are dismissed from the hospital and return home and that can wirelessly monitor the patients’ health and deliver measured doses of drugs on an approved schedule. This project is part of the “Closed Loop Healthcare” program

The potential value of turning the nation’s freeways into “smart transportation systems” is enormous. In California alone the economic penalty of traffic congestion has been estimated at $400 million in extra costs and $3.5 million in lost wages every day.

The tightly integrated computing and networking systems required to achieve these benefits are currently under development. Because they rely on the internet, however, they are vulnerable to cyber attacks by criminals, terrorists or hostile nations. There was a Hollywood dramatization of this risk in the 2003 movie “The Italian Job” when a hacker takes control of the Los Angeles traffic control system to aid his confederates in stealing a load of gold bullion from an armored car and then escaping.

The project is a collaboration between a team of cyber-physical security experts at Vanderbilt and researchers at University of California, Berkeley College of Engineering and the Partners for Advanced Transportation Technology’s Connected Corridors project.

The Connected Corridors team is investigating tools and technologies to coordinate components of major traffic corridors and operate them as a cohesive and integrated system. The first Connected Corridors pilot will be implemented on a multi-modal, heavily congested corridor in Southern California and will include freeway ramp meters and arterial signal systems working in concert with each other.

The ISIS team had previously studied the nature of network cyber-attacks for the Air Force Research Laboratory and is modifying its methods so they work with the Berkeley traffic control system.

“The immediate object of our project is to identify the characteristics of such attacks so that system operators can recognize them when they happen and take the effective steps required to counteract them,” said Gabor Karsai, leader of the ISIS team. “The longer term goal is to develop algorithms that can automatically detect these intrusions and nip them in the bud.”

In order to dramatize the problem and potential solutions, the researchers have developed a video scenario titled “Smart Transportation Systems: Mitigating Carmageddon” that depicts how such an attack could take place, the effect it would have on the freeway, as well as the tools that the traffic system operators could use to identify the attack, mitigate its impact and return traffic flow to normal levels.

The scenario begins when a former transportation department employee comes up with a system that turns freeway-metering lights green for the vehicles equipped with his technology. He sells the system to a local shipping company as a way to cut down on delivery times. He is then approached by a hacker who pays him to add a second device to his system, one that interferes with the communication link between the metering lights and the traffic control center. When enough trucks with this equipment are on the freeway, it gives the hacker virtual control over the traffic system. One weekday morning the hacker uses this capability to bring traffic to a standstill, but the manager of the traffic control center checks on the performance of the metering lights with the traffic cameras, realizes they are misbehaving and launches a set of cyber-security tools that identify the locations where falsified data is being inserted into the system. This allows the controllers to manually control the metering lights, returning traffic to normal.

Based on his extensive experience, Valdastri – in collaboration with ISIS research scientists Akos Ledeczi and Peter Volgyesi – is developing open source hardware and software modules that will make it much easier for biomedical engineers and researchers in the field of miniature robotics to design ingestible capsule robots for a variety of different tasks. Advances in the miniaturization of electronic devices have made it possible to package a wide variety of different sensors, actuators and communication devices into capsules small enough to swallow. But designing them so they can operate safely and reliably in the delicate and unstructured environment of the human body make them difficult to develop without a great deal of specialized expertise.

Valdastri intends to make this design process much easier by creating a set of modular hardware components that can be added, removed or customized as needed just like Lego bricks; a library of software programs for operating the capsules and special simulation software that will allow researchers to test how well their designs will perform.

This environment can be used for designing customized capsule robots that can monitor a patients vital signs around the clock after they have been discharged from the hospital and deliver drugs in the proper dosages when required. This effort is part of a much larger program that is developing a number of new technologies designed to both improve the quality and reduce the costs of caring for elderly patients by expanding the ability to monitor their condition from the hospital to the ambulance to the home.