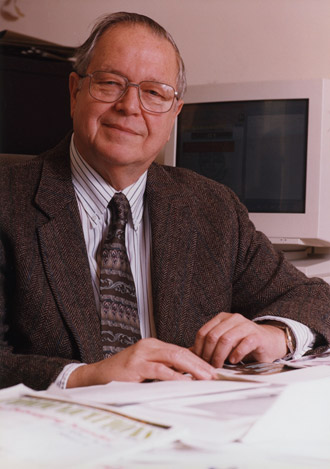 Emeritus professor was once targeted by Unabomber

Patrick Fischer, who helped build the Department of Computer Science at Vanderbilt University, died Aug. 26 in hospice care in Montgomery County, Md. He was 75.

An expert in informational systems for education institutions, computational complexity and interactive database systems, Fischer taught 18 years at Vanderbilt’s School of Engineering beginning in 1980 and served as chair of the computer science department for 15 of those years.

Fischer deftly adjusted teaching methods in the department to dramatic industry and educational innovations during his tenure.

“Traditional classroom methods don’t work as well anymore,” he told the Vanderbilt Register in 1995. “Students are used to multimedia, so blackboard lectures have become boring.”

Fischer was periodically in the news as one of the early targets of terrorist Ted Kaczynski, known as the Unabomber. On May 5, 1982, a package exploded in the hands of Fischer’s secretary. She was hospitalized for three weeks with powder burns and cuts to her chest, arms and hands.

Fischer was at a conference in Puerto Rico the day of the incident. He was interviewed by many news outlets over the years about the Unabomber, including The New York Times and CBS News.

Fischer said he had never met Kaczynski, but it’s possible they had crossed paths during their college years.

“The thing is: Yes, we know a lot of the same people,” Fischer told the Dallas Morning News in 1996. “But I don’t think I know him directly. I didn’t recognize the face, either the shaven face or the bearded face. I don’t recognize the name at all.”

Although Kaczynski was captured and jailed in 1996, he was never convicted of the Vanderbilt explosion because of a five-year statute of limitations for prosecuting a bombing in which no one was killed.

Born in St Louis, Fischer grew up in Ann Arbor, Mich., and graduated from the University of Michigan in 1957. He earned his Ph.D. in mathematics from the Massachusetts Institute of Technology. He held faculty positions at Harvard, Cornell, Waterloo and Pennsylvania State University before his arrival at Vanderbilt. He was named professor of computer science, emeritus, effective December 1997.

In addition to his wife, survivors include their daughter, Carolyn Fischer, and a son by a previous marriage, Carl Perry Fischer.

Funeral arrangements were pending. In lieu of flowers, memorial contributions can be made to the following organizations: