The device uses the latest advances in computer, sensor, electric motor and battery technology to give it bionic capabilities: It is the first prosthetic with powered knee and ankle joints that operate in unison. It comes equipped with sensors that monitor its user’s motion. It has microprocessors programmed to use this data to predict what the person is trying to do and operate the device in ways that facilitate these movements.

“When it’s working, it’s totally different from my current prosthetic,” said Craig Hutto, the 23-year-old amputee who has been testing the leg for several years. “[rquote]A passive leg is always a step behind me. The Vanderbilt leg is only a split-second behind.”[/rquote]

The bionic leg is the result of a seven-year research effort at the Vanderbilt Center for Intelligent Mechatronics, directed by Michael Goldfarb, the H. Fort Flowers Professor of Mechanical Engineering. The project was initially funded by a seed grant from the National Science Foundation, followed by a development grant from the National Institutes of Health. Key aspects of the design have been patented by the university, which has granted exclusive rights to develop the prosthesis to Freedom Innovations, a leading developer and manufacturer of lower limb prosthetic devices.

“With our latest model, we have validated our hypothesis that the right technology was available to make a lower-limb prosthetic with powered knee and ankle joints,” said Goldfarb. “Our device illustrates the progress we are making at integrating man and machine.”

The Vanderbilt prosthesis is designed for daily life. It makes it substantially easier for an amputee to walk, sit, stand, and go up and down stairs and ramps. Studies have shown that users equipped with the device naturally walk 25 percent faster on level surfaces than when they use passive lower-limb prosthetics. That is because it takes users 30 to 40 percent less of their own energy to operate.

Recent technological advances have allowed the Vanderbilt engineers to produce a device that weighs about nine pounds – less than most human lower legs – and can operate for three days of normal activity, or 13 to 14 kilometers of continuous walking, on a single charge. They have also dramatically reduced the amount of noise that the latest model makes, although it is slightly louder than they would like.

One of the latest capabilities that the engineers have added is an anti-stumble routine. If the leg senses that its user is starting to stumble, it will lift up the leg to clear any obstruction and plant the foot on the floor.

In order to incorporate all the improvements, the prosthetic’s hardware design has gone through seven versions and its electronics board has been redone 15 times.

According to Goldfarb, it was tough to make the prosthetic light and quiet enough. In particular, it was difficult to fit the powerful motors and drive train that they needed into the volume available. The biggest technical challenge, however, was to develop the control system.

“As you add greater capability, you are also adding greater liability,” he said. “Not only does the controller have to perform individual operations reliability, but it has to perform several operations at the same time and not get confused.”

The Center for Intelligent Mechatronics is also developing an anthropomorphic prosthetic arm project and an advanced exoskeleton to aid in physical therapy. 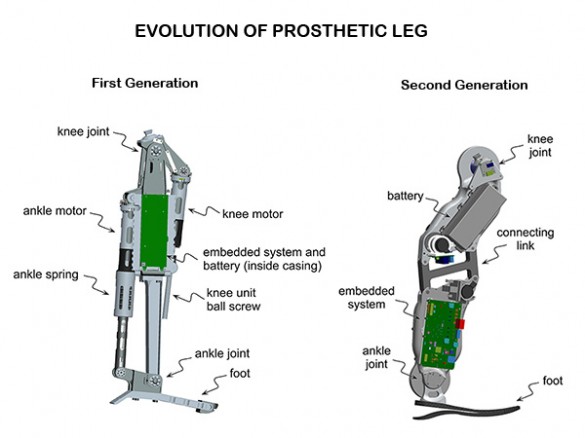