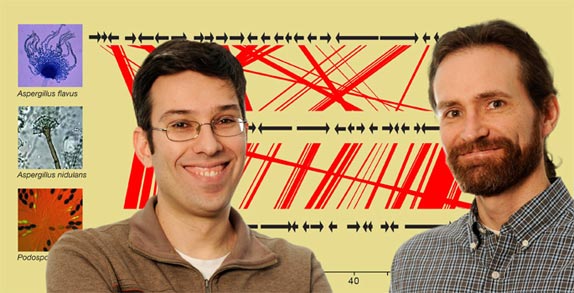 Since the days of Darwin, the “tree of life” has been the preeminent metaphor for the process of evolution, reflecting the gradual branching and changing of individual species.

The discovery that a large cluster of genes appears to have jumped directly from one species of fungus to another, however, significantly strengthens the argument that a different metaphor, such as a mosaic, may be more appropriate.

“The fungi are telling us something important about evolution … something we didn’t know,” said Antonis Rokas, assistant professor of biological sciences at Vanderbilt. He and research associate Jason Slot reported their discovery in the Jan. 25 issue of the journal Current Biology.

Rokas and Slot discovered that millions of years ago, a cluster of 23 genes jumped from one strain of mold commonly found on starchy foods like bread and potatoes, Aspergillus, to another strain of mold that lives in herbivore dung and specializes in breaking down plant fibers, Podospora.

The findings came as a major surprise, as there are only a handful of cases in recent evolutionary history where this type of gene transfer between organisms, known as horizontal gene transfer, has been reported in complex cells like those found in plants, animals and fungi.

“Because most people didn’t believe that such large gene clusters could be transferred horizontally, they haven’t looked for them and they haven’t been found,” Rokas said.

Rokas and Slot detected the unprecedented gene cluster transfer during a detailed comparison of the entire genomes of nearly 100 species of fungi. The primary goal of their research is to identify the most reliable methods for determining the evolutionary relationships of species of all kinds. In the course of their analysis, they discovered the 23-gene capture.

Why fungi produce so many drugs and poisons

The jumping gene cluster codes for a toxic compound called sterigmatocystin. Cells produce this type of compound to attack competing organisms or to protect themselves from attacks. As a result, these types of compounds are the source of a number of important drugs, like penicillin and cyclosporin, as well as a number of natural poisons.

“Fungi produce an astonishing variety of drugs and poisons. Our discovery that one of the largest gene clusters responsible for making such a poison moved intact between species suggests that horizontal transfers of wholesale pathways may have contributed significantly to the generation of this diversity,” Rokas said.

In the past, evolutionary research has focused on the passage of genes from parent to child, known as vertical gene transfer. This process, acted out over the eons of geological time, gives rise to the branching structure of the tree of life.

Horizontal gene transfer was first discovered in bacteria, and has been recognized as largely responsible for the problem of drug resistance. If one bacterium evolves a method for surviving a drug, this ability can spread rapidly to other unrelated microorganisms via horizontal gene transfer, substantially reducing the drug’s effectiveness.

Though researchers now generally agree that horizontal gene transfer is relatively common among simple organisms like bacteria, they have continued to assume that it remained relatively rare among complex organisms like plants and animals.

“The thinking has been that there is very little horizontal gene transfer among plants and animals except for a few big, ancient events and maybe the occasional transfer of a single gene here or there,” Slot said. “Our discovery suggests that the horizontal transfer of gene clusters may have been a big player not only in the evolution of bacteria but also in more complex organisms.”

This work was supported by funds provided by the Searle Scholars Program and the National Science Foundation.