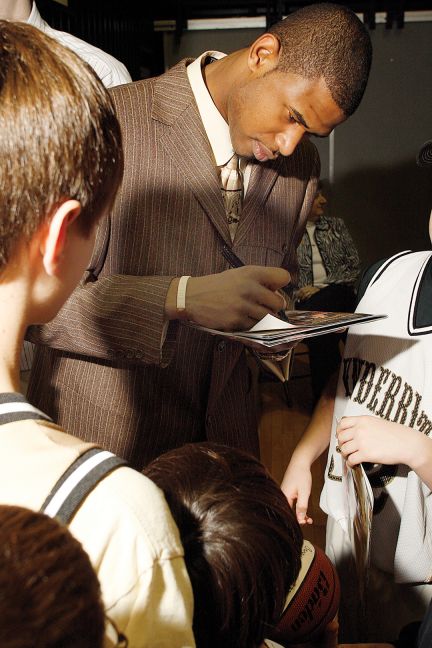 Vanderbilt basketball star Shan Foster is the kind of student who gives teachers hope that the next generation is in good hands.

“I found him to be a very compassionate and caring student,” said Sharon Shields, professor in the practice of human and organizational development. “He is someone who can make a difference.”

Foster, a May graduate in human and organizational development, was the 2008 SEC player of the year, Vanderbilt’s all-time leading scorer and winner of the 2008 Lowes Senior Class Award given to NCAA Division I athletes who complete their undergraduate degrees. Fans won’t soon forget Foster’s final home game in March, when he posted 42 points—including nine straight three-pointers—to lead the Commodores to an 86-85 overtime win over Mississippi State. He was selected by the Dallas Mavericks in the NBA draft, but has signed a contract to play professionally in Italy.

When not on the court, the self-taught pianist regularly attracted admirers who watched him play at various keyboards around campus, singing gospel tunes and praise music to relax.

His teachers say he poured just as much passion into his education, where he learned that his professors “expected the same out of me in the classroom as on the court.”

Brian Griffith, director of the human and organizational development program, was Foster’s faculty adviser. “He’s a man of integrity and deep faith,” said Griffith, who said he was grateful to know Foster as more than an athlete. “He was always looking for ways to reach out to others.”

Foster rarely turned down appearances at community organizations and churches, even during the hectic basketball season.

Foster rarely turned down appearances at community organizations and churches, even during the hectic basketball season. He volunteered with developmentally disabled youngsters at the Susan Gray School and mentored local high school students.

Howard Sandler, professor of psychology, remembers Foster’s passion to improve himself. “What impressed me most about him was that after he did poorly on the first exam, he came to me and said that his performance was not up to his standards, that he was going to do better, and that he needed me to tell him how he should go about doing better,” said Sandler, Foster’s statistics professor.

Foster succeeded in the class and continued to stay in touch. Sandler often found himself in a “big bear hug” when he came across the 6-foot-6 shooting guard on campus.

“Shan has his head on straight,” Sandler said. “He is one of the nicest, most genuine people I know. I am very proud of him and what he has done to make Vanderbilt a better place.”

Catalyst for Change: Shan Foster, BS’08, has found success off the court in working to end violence against women