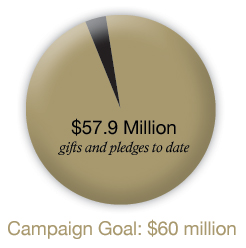 Over the past year, thanks to numerous alumni, parents and friends who stepped forward and made a gift to Peabody, our campaign has grown to $57.9 million. All of these gifts added to Peabody’s ambitious $60 million campaign goal as part of the university’s ongoing comprehensive campaign, Shape the Future.

As Peabody continues its emphasis on attracting outstanding students, our campaign continues to make scholarship support a top priority.

Interest in Vanderbilt and Peabody has never been greater. This year, applications for enrollment increased by more than 30 percent from highly qualified students from across the country and abroad. Scholarship opportunities help attract these talented young men and women—making it possible for them to attend. Your generosity helps ensure that our need-based financial aid is competitive and allows us to give more students an opportunity to attend a top-class educational institution like Peabody.

The importance of your annual gift…

While there are many ways to support Peabody, annual gifts are the foundation of philanthropy for the college and is important to our sustainability. Peabody’s goal this fiscal year (ending June 30, 2009) for unrestricted funds is $978,285.

Your gift, your generosity helps shape tomorrow’s leaders. Thank you.

This report reflects gifts made to Peabody College between July 1, 2007 and June 30, 2008. Where known, alumnae of Peabody College and Vanderbilt University are listed by their full name. Every effort has been made to ensure the accuracy of this report. If an error has been made, we offer our sincerest apology and ask that you bring it to our attention by contacting the Peabody College Development and Alumni Relations Office at 615/322-8500. 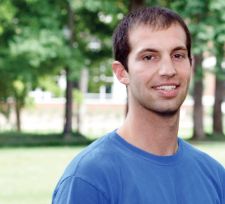 Nick Lee first visited Vanderbilt the summer before his senior year in high school. It didn’t take long for him to know that this was the perfect fit for him.

“The second I walked on to campus, I knew that this was the place for me. I knew that I needed to be here, but I also knew that paying for it would be an issue,” Nick says.

But conversations with the financial aid office proved fruitful and Nick has happily been making the most of his time at Peabody. Aside from his class work, Nick is involved with Vanderbilt Catholic, the Vandy Fanatics and Beta Upsilon Chi (Brothers under Christ) fraternity.

“People always ask me what I like best about Peabody. The thing that has really impressed me is that people here just want to do good things out in the world. That’s really inspiring to me,” he added.

“The generosity that allows me to be here is just overwhelming. It just makes me want to put everything I can into my time here. To be able to come to this school is a true gift—and I know that I need to give a gift back one day.” 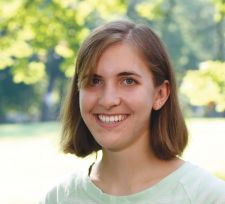 Like many Peabody students, Christine Orlowski is eager to make her mark on the world after graduation. And she believes that her education will allow her to do just that. She is interested in working as a counselor at an elementary or middle school or working at a nonprofit.

“At Peabody the professors aren’t just teaching us facts and figures,” she says. “They really want us to get involved in the community and they’re really eager to help us change the world.”

Christine has been pleased with the practical aspects of her education and her child development training can be easily applied to real world situations.

“I have been really involved in the research labs, and it’s given me a lot of great experience that I can use later on—especially in psychology,” she says.

The generosity of the anonymous donors of Christine’s scholarship has made a real impression on her.

“I may not know exactly who provided my scholarship, but I am deeply grateful to whomever it is. I hope that someday down the road I can provide the same kindness to someone else.” 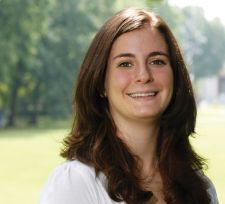 Colette Lelchuk has her sights set on a career in either advertising or marketing after graduation, and she’s confident that her Peabody experience will serve her well.

“I didn’t want to go to a school and focus on marketing immediately. I wanted to be able to get a full education and have options if something didn’t work out,” she says. “Vanderbilt had everything I really wanted with fantastic academics plus a spirited athletic atmosphere.”

Activities away from the classroom and athletics are important to Colette, and she spent time this summer putting together a club basketball team.

“I talked to area YMCAs and AAU teams, and they are all willing to play a club team from Vanderbilt,” she says. She is also a member of Alpha Kappa Psi business fraternity and Alpha Omicron Pi sorority. With five older sisters, Colette is especially appreciative of her scholarship.

“When you have to put six kids through college, it’s always a struggle financially. I wouldn’t have been able to come here without the help. My benefactors should feel great about what they’re doing. I would love to be able to feel that same way in the future,” she added. 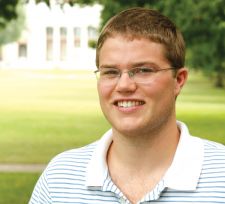 Billy Ripley first left home in the 7th grade when he went to boarding school in Virginia. With that experience, he had some strong ideas about what he wanted in a college.

“I wanted a college that really felt like home, not just a place where I was taking classes,” he says. “With Vanderbilt you have the amazing campus, Nashville and the people are just happy to be here. It’s an unbeatable combination.”

And when it comes to academics, the flexible HOD major is a perfect fit.

“When I first read about HOD, it seemed like it would prepare me, no matter what I wanted to do in my career,” he says. “It—and Peabody—really just prepare you for life.”

Even though he’s not sure what career path he’ll follow, Billy is certain about his desire to give back to Peabody.

“The best way that I can thank the Monteleone family for my scholarship is to do the same thing for somebody else one day. I want to make sure that someone who couldn’t have done otherwise will have the same experience and opportunities that I’ve had.”

Cornelius Vanderbilt Founders Level
($25,000 and above)

Thank you to all our donors who have given gifts of $249 or less to Peabody College. Your gifts are very important and vital to our ongoing programs. Although you are too numerous to name, please know that we appreciate your continued support and generosity to the College. Thank you!