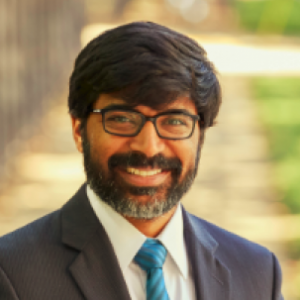 Ganesh Sitaraman‘s current research addresses issues in constitutional, administrative and foreign relations law. Professor Sitaraman is the author of The Public Option: How to Expand Freedom, Increase Opportunity, and Promote Equality (Harvard, 2019) (with Anne Alstott), The Crisis of the Middle-Class Constitution (Knopf, 2017), which was named one of The New York Times' 100 notable books of 2017, and The Counterinsurgent‘s Constitution: Law in the Age of Small Wars (Oxford University Press, 2012), which was awarded the 2013 Palmer Prize for Civil Liberties. Professor Sitaraman was on leave from Vanderbilt‘s faculty from 2011 to 2013, serving as Elizabeth Warren‘s policy director during her campaign for the Senate, and then as her senior counsel in the Senate. Before joining Vanderbilt‘s law faculty in 2011, Professor Sitaraman was a law clerk for Judge Stephen F. Williams on the U.S. Court of Appeals for the D.C. Circuit, and the Public Law Fellow and a lecturer at Harvard Law School. He has also been a research fellow at the Counterinsurgency Training Center – Afghanistan in Kabul. An Eagle Scout and a Truman Scholar, he earned his A.B. in government magna cum laude at Harvard, a master‘s degree in political thought from Emmanuel College, Cambridge, where he was the Lionel de Jersey Harvard Scholar, and his J.D. magna cum laude from Harvard Law School, where he was an editor of the Harvard Law Review.

What Alexandria Ocasio-Cortez and Marco Rubio Agree On

New York Times August Tue, 2019
More ambitiously, Timothy Meyer and Ganesh Sitaraman of Vanderbilt Law School have proposed a large-scale reorganization of federal agencies, bringing domestic development, trade and export promotion under one Department of Economic Growth and Security, which would focus on both domestic economic policy and international competition. Ms. Warren has embraced a version of this idea. Similarly, Senator Gary Peters, Democrat of Michigan, has called for the creation of a National Institute of Manufacturing, taking inspiration from the National Institutes of Health. As America falls behind in key technologies, we may also have to use defense procurement, along with other carrots and sticks, to mobilize companies to compete in strategic sectors, such as 5G. America has a long and successful history of employing this sort of robust industrial policy.

When Millions Can’t Afford to Retire, the U.S. Needs a Better Option

The Atlantic July Wed, 2019
According to a recent Associated Press survey, almost a quarter of Americans say they plan to never retire, and it isn’t because they all love their jobs. The United States faces a retirement crisis. Workers have been forced to assume more and more financial risk, and as a result, many won’t have enough to live with dignity when old age arrives. Boston College’s Center for Retirement Research projects that half of workers will reach retirement with too little savings to fund it. When tens of millions of Americans all have the same problem of setting aside too little money for retirement, it’s not a failure of individual initiative. It’s a sign of a structural problem—one that can’t be solved by scolding people to save more.

There Should Be a Public Option for Everything

New York Times July Sat, 2019
The struggle between capitalism and socialism is back. “America will never be a socialist country,” President Trump tells us, even as Senator Bernie Sanders and Representative Alexandria Ocasio-Cortez champion democratic socialism. At the same time, a consensus is growing — from Ray Dalio, the billionaire hedge fund manager, to Joseph Stiglitz, the economist and Nobel winner — that capitalism needs major reforms if it is going to survive. Perhaps surprisingly, given the trend toward the privatization of public services over the last generation, American history offers a way forward: the public option.

We need constitutional reform — starting with the electoral college

Washington Post April Wed, 2019
“When Americans have confronted major political, economic and social crises throughout our history, we have debated — and adopted — constitutional changes to address them,” said Ganesh Sitaraman, a law professor at Vanderbilt University. “Many of the recent proposals for constitutional reforms are in line with this tradition.”

How to save the Supreme Court

Vox October Wed, 2018
With the confirmation of Brett Kavanaugh to the Supreme Court, Republicans have succeeded in a decades-long effort to capture total control of the judicial branch. While they will surely celebrate this victory, the real loser in this partisan battle is not the other side — it’s the Supreme Court. And without radical reforms to save its legitimacy, the Court may never recover from its transformation into a nakedly partisan institution.

The Casualties of Class Warfare

Wall Street Journal April Wed, 2017
That, at any rate, is the contention of Ganesh Sitaraman, senior fellow at the Center for American Progress and professor at Vanderbilt Law School. The Constitution, he argues, presupposes a stable and politically potent middle class. That class is now nearing collapse, and “economic inequality threatens our republic.” He foresees the corruption and hollowing-out of the constitutional order—a plutocratic regime run by and for a small moneyed elite.

Publisher: Democracy: A Journal of ideas Authors: Ganesh Sitaraman
2019 "The challenge we face today is not one of authoritarianism, as so many seem inclined to believe, but of nationalist oligarchy."

Trade and the Separation of Powers

Publisher: California Law Review Authors: Ganesh Sitaraman and Thimothy Meyer
2019 "There are two paradigms through which to view trade law and policy within the American constitutional system. One paradigm sees trade law and policy as quintessentially about domestic economic policy."

Taking Antitrust Away from the Courts

Publisher: Elsevier Authors: Ganesh Sitaraman
2018 "A small number of firms hold significant market power in a wide variety of sectors of the economy, leading commentators across the political spectrum to call for a reinvigoration of antitrust enforcement."

Ganesh Sitaraman, The Crisis Of The Middle Class Constitution