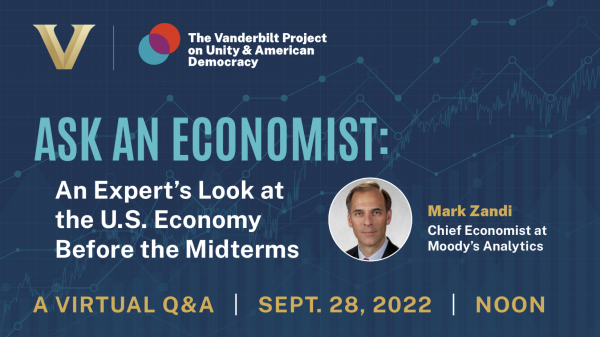 The Vanderbilt Project on Unity and American Democracy is hosting a virtual Q&A on Wednesday, Sept. 28, at noon with Mark Zandi, chief economist of Moody’s Analytics, where he will answer audience questions related to the U.S. economy in the lead-up to this November’s midterm elections.

The economy is at the forefront of many voters’ minds as election season approaches, and much media coverage devolves into speculation and political punditry instead of offering a detailed distillation of the economic forces behind the headline numbers. Our Ask an Economist event will aim to equip voters with facts and evidence from an economic expert as we head to the polls in the coming months.

You can click here to register to stream the event.

Tune in to learn more about the current state of the U.S. economy, how we got here and where we might be going.

Mark M. Zandi is chief economist of Moody’s Analytics, where he directs economic research. He is on the board of directors of MGIC, the nation’s largest private mortgage insurance company, and is the lead director of Reinvestment Fund, one of the nation’s largest community development financial institutions, which makes investments in underserved communities. Zandi is the author of Paying the Price: Ending the Great Recession, Beginning a New American Century, the book Financial Shock: A 360º Look at the Subprime Mortgage Implosion, and How to Avoid the Next Financial Crisis. Zandi earned his bachelor’s degree from the Wharton School at the University of Pennsylvania and his Ph.D. at the University of Pennsylvania.