A new index designed by researchers at Vanderbilt University shows a steady erosion of trust in American political institutions over the past 40 years, with it hitting its lowest point in 2017 after racial unrest in Charlottesville, Virginia.

Launched by the Vanderbilt Project on Unity and American Democracy, the Vanderbilt Unity Index seeks to quantify the abstract term “unity” by measuring on a quarterly basis the fluctuations in Americans’ general faith and trust in their political institutions on a scale of 0-100. The VUI will be updated quarterly.

“In keeping with its mission to elevate facts and evidence in the national dialogue, the project aims to highlight periods of unity and disunity over the last 40 years, potentially providing a roadmap to leaders and lawmakers hoping to bring the nation together—and to hold those same leaders to account,” said John Geer, co-director of the Vanderbilt Poll and Ginny and Connor Searcy Dean of the College of Arts and Science, which houses the Unity Project. “Even though the VUI shows a marked improvement with the onset of the Biden administration, it still lags well below where it stood during most of Ronald Reagan’s presidency."

Mary Catherine Sullivan, a doctoral candidate in political science and VUI co-author, acknowledged in the white paper outlining the index’s methodology that “disagreement, not unity, is the normal state of affairs in American public life.” However, she said that disagreements about politics appear to have hardened recently into existential questions. “Evil intent is associated with the other side, rather than just disagreement about the means to achieve the common good.”

To provide a historical basis against which to measure future readings, the VUI is made up of these five well-established components available to scholars since 1981:

The VUI reached its high mark in the late summer of 1990 in the lead-up to the first Gulf War under President George H.W. Bush. From there, it follows a general downward trend, with nine of the 10 lowest-scoring quarters occurring between 2016 and 2020—“a period consumed with divisive political rhetoric and critique of democratic institutions,” according to the authors.

“Americans are now less politically unified than they were 40 years ago,” the authors wrote in the white paper. “That is not a surprising result, but that fact gives us some confidence we may be on to something with the VUI.”

The researchers said they anticipate questions about the validity of the survey. “Even so, it represents an important starting point, and future changes and refinements will be invaluable.” 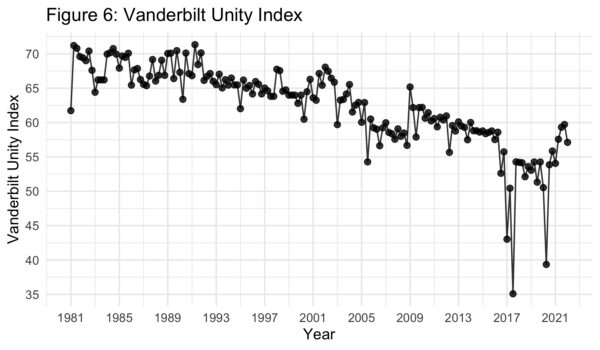 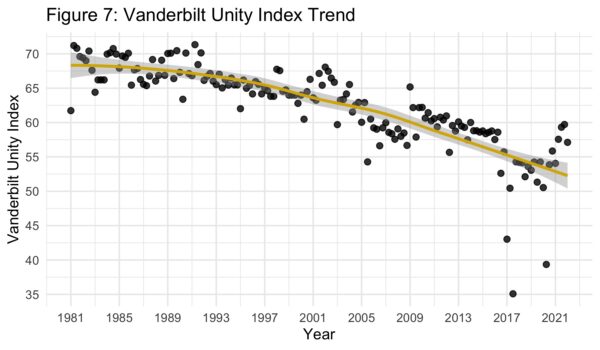