The Science of Poetry

The opening poem in Focal Point, the debut collection by Jenny Qi, BA’11, navigates the fraught emotional space between a loving daughter’s grief over her mother’s death and a scientist’s clear-eyed inquiry into the disease—cancer—that caused it.

Qi writes of “nights at a microscope in a dark room / … sitting too still, turning a knob just so to focus / on the right field of cells,” even as images of her mother’s final days haunt her. As she injects the “soft, warm bodies” of mice with tumor cells, she observes “how brutal / to learn why I couldn’t save / what I couldn’t save.”

This poem—“Point At Which Parallel Waves Converge & From Which Diverge”—is, like most of the poems in the collection, drawn from Qi’s own story. She lost her mother when she was just 19 and still an undergraduate majoring in biology at Vanderbilt. She went on to earn a Ph.D. from the University of California–San Francisco in biomedical science, with research focused on a rare form of pancreatic cancer. Today, she remains in San Francisco, working as a competitive intelligence manager in oncology. She currently tracks research in ovarian cancer.

Her literary career has run parallel to her scientific pursuits, but the love of writing came first, beginning at age 8 when her mother gave her a journal. By the time she was 11 or 12, she was writing poetry, inspired by William Blake’s “The Tyger,” which she stumbled across as the preface to a now-forgotten young adult novel. “I loved that poem, the imagery and the sonic qualities of it,” she recalls. “I also liked rap music, and the convergence of those two things made me really into poetry.”

At the time, there weren’t a lot of resources for a budding young writer in Las Vegas, where Qi lived with her parents, who had immigrated to the United States from China a few years before she was born. Her mother was a high school history teacher in China, and her father studied biochemistry, but they confronted professional hurdles after coming to the U.S. In Las Vegas, Qi’s parents worked a variety of jobs, including as casino dealers. In the poem “Casino,” Qi writes of her mother’s decision to come to “a land paved with fool’s gold” where she works dealing “greasy kings and colored chips” while her daughter waits for her to return home “from the bright little lights.”

As a toddler, Qi was sent to live for a time with her paternal grandparents in Yangzhou, China, but she returned to the U.S. to start school, where her Asian identity set her apart. “I was bullied a lot for being Asian,” she says, and one result was a degree of alienation from her first language. “My Chinese is really not that great anymore. Chinese became kind of a shameful thing, even though my mom tried to make it something I could be proud of.” Her mother, whose Chinese name was Zhihong Yu (known in the U.S. as Lisa Yu), encouraged Qi to work on her Chinese skills by translating her high school lessons, but over time those skills fell away. “When she passed, I kind of lost my connection to the language,” Qi says.

I thought writing was something I could never do as the child of immigrants who had really struggled in the U.S.

She skipped two grades and came to Nashville alone at 16 to attend Vanderbilt, something she describes as “a pretty big culture shock.” But she also found, for the first time, a community of other Asian American students. “That’s something I was sort of excited about, being able to meet people with a similar background. I still value those friendships.”

She was focused on a pre-med track academically but continued to pursue her writing. “I took a lot of creative classes but went into STEM because it was more practical,” she says. “I thought writing was something I could never do as the child of immigrants who had really struggled in the U.S.” She served as poetry editor for The Vanderbilt Review and in her sophomore year studied traditional verse and form in a workshop with acclaimed poet Mark Jarman, who recalls her as “one of the outstanding students in a class of outstanding students.” The group included, in Jarman’s words, “some very strong seniors,” as well as Nate Marshall, who is now an important figure in the poetry world. Nevertheless, he says, “despite her youth, she held her own in that class.” Jarman is thanked in the book’s acknowledgements for his kindness and for shaping Qi’s early understanding of the craft.

Qi ultimately veered away from her medical school ambitions in favor of research. She says she was never terribly enthusiastic about becoming a physician, and taking a job in a lab gave her a taste for the culture of research. “I liked working in the lab. People were curious about things, and it was a more laid-back environment.”

Looming over all her undergraduate experiences, however, was her mother’s lengthy illness and eventual death, which came during Qi’s senior year. “It was such emotional whiplash when my mom was ill,” she says. “My parents kept a lot of things from me. They didn’t want my academic performance to suffer. But when I came home, suddenly I was expected to be in a caretaker role.”

This, too, had an impact on Qi’s decision to forgo a medical career. Though both her parents spoke English, they had difficulty navigating the demands of the U.S. health care system. “You really have to advocate for yourself here,” Qi says, “and they weren’t used to that.” The task fell to Qi, who confronted terribly difficult decisions, especially during her mother’s final days, with no real support from the doctors. “I felt like I had a very bad, traumatizing experience,” she says of that period. “Some people might look at that and think, ‘I’m going to be the one to change things,’ but I was just so turned off by what I had seen.”

Qi carried that experience with her as she pursued her doctorate in San Francisco. “In grad school, I became obsessed with this idea that we need to change attitudes around death,” she says, noting that the taboo against accepting death in a frank and humane way is shared by American and Chinese cultures.

Initially she found it too painful to write about her experience but says, “After about a year, it started to pour out.” She began to attend a weekly poetry workshop run by a UCSF professor and physician, David Watts, who urged her to turn the resulting flood of poems into a book. She became interested in science journalism—because it seemed “more practical than poetry”—and served as editor-in-chief of UCSF’s student newspaper. She also began writing personal essays, including two exquisite pieces on her mother’s death published in The Atlantic and The New York Times.

In grad school, I became obsessed with this idea that we need to change attitudes around death.

She continues to work on essays today, finding prose “easier to access” during the combined demands of work and launching a first book. But, she says, “I’ll always write poetry.” Her recent poems are focused less on her personal grief and more on larger questions about the role of technology in modern human life, as well as the threat of climate instability. (“Contingencies,” the final poem in Focal Point, describes living with the California wildfires: “I wake up in the dark smell smoke / so familiar I don’t think twice.”)

Memories of her mother remain a profound well of literary inspiration for Qi, however, and she plans a kind of posthumous collaboration. “My mom was also a writer but didn’t have the opportunity to work on that until the end of her life,” Qi says, explaining that Yu wrote two books in Chinese during her last years: a memoir about her childhood during the cultural revolution, which was published in China, and an unpublished novel about her experiences as an immigrant in the U.S. In an echo of those language lessons from Qi’s younger years, mother and daughter began translating the memoir shortly before Yu’s death. Qi abandoned the project for a long time. “During grad school, it was too hard to think about it,” she says. But now she’s ready to resume the work for both her mother and herself. “I want to translate both of these books,” she says, “and finish what we started.” 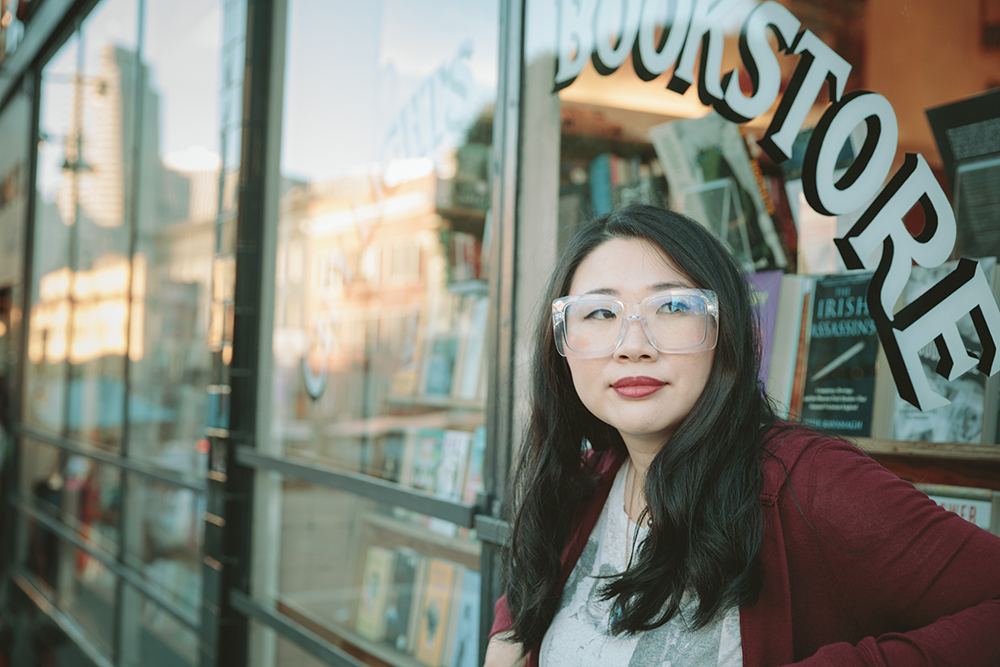 POINT AT WHICH PARALLEL WAVES CONVERGE & FROM WHICH DIVERGE

Researcher, prevention won’t save my life, tweets a patient

with metastatic cancer. I’m reminded of my mother:

Why don’t you want to study cancer? when I expressed

interest in HIV. In the hospital, call from a professor,

my mother clapping once then silence;

the roommate thirty years her senior

who called my voice lovely,

who called my mother lucky,

whom I resented because

she outlived my mother;

nights at a microscope in a dark room

where the lights turn off after ten,

sitting too still, turning a knob just so to focus

on the right field of cells; the eight hundred mice

into their soft warm bodies, hating them for biting me

but understanding, stroking their white fur in apology;

covering cages with paper so they can’t watch their sisters die.

But I can, and I see my mother in those graying eyes,

eyes I refused to donate because how would she see,

and I think how cruelly futile all this

to learn why I couldn’t save

what I couldn’t save.

Maria Browning’s work has appeared in Guernica, The Los Angeles Review
of Books and The New York Times. She’s the editor of Chapter 16,
an online publication devoted to the literary life of Tennessee.