Older adults can rediscover the joy of learning in an inclusive community through the Osher Lifelong Learning Institute at Vanderbilt, which is offering a variety of summer courses that include the rise of Black women’s political participation, an introduction to Latin America and a multimedia exploration of comedy through the ages. Other classes focus on short stories, tips for writing memoirs and more.

Vanderbilt is home to the only Tennessee lifelong learning institute endowed by the Bernard Osher Foundation. Many of the classes, which are noted for their academic rigor, are taught by current and retired Vanderbilt faculty.

Tuition ranges from $30 to $80 for each course, which are priced individually. 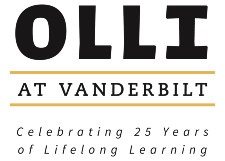 “One of the benefits of holding classes online is that we can welcome all those 50 and older from beyond Middle Tennessee to join our local participants,” said Norma Clippard, director of OLLI at Vanderbilt. “However, we look forward to the day when we will be able to gather again in person for instruction and special events.”

The following courses, all of which are noncredit, begin in July: